From an interview with radical feminist Julie Bindel in 2015:

It won’t, not unless men get their act together, have their power taken from them and behave themselves. I mean, I would actually put them all in some kind of camp where they can all drive around in quad bikes, or bicycles, or white vans. I would give them a choice of vehicles to drive around with, give them no porn, they wouldn’t be able to fight – we would have wardens, of course! Women who want to see their sons or male loved ones would be able to go and visit, or take them out like a library book, and then bring them back.

And I am sick of hearing from individual women that their men are all right. Those men have been shored up by the advantages of patriarchy and they are complacent, they are not stopping other men from being shit.

I would love to see a women’s liberation that results in women turning away from men and saying: ‘when you come back as human beings, then we might look again.’”
http://www.radfemcollective.org/news/2015/9/7/an-interview-with-julie-bindel

Was this a joke?

Let us assume – for the sake of argument – that it was some edgy joke (but someone show me evidence of this, if you are going to seriously defend it).

Imagine if we replaced the word “men” with “Jews” or “Muslims” – and you would have something indistinguishable from the mentally-ill ravings and hatred of the Alt Right (which Alt Righters frequently do defend as just “edgy” humour).

But, for some reason, leftist Third Wave Feminists can casually joke about throwing men into some kind of concentration camps in our bizarre, truly deranged cultural leftist world.

Of course, if she was serious, then what on earth does this say about modern Third Wave Feminism? You tell me. 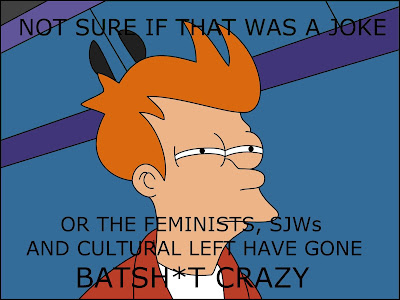