Here is William Jennings Bryan below as photographed in 1896: 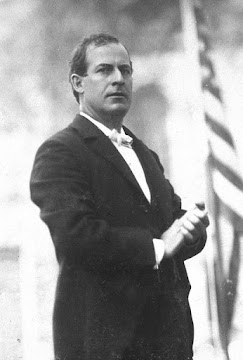 In the 1890s, America was in the last stages of the Classical gold standard, and from 1873 to 1896 – as in the rest of the Western world – America was hit by an unexpected and steady general price deflation.

In Britain, this appears to have led to a decline and then stagnation in real capital investment until the later 1880s (see here).

People in private debt did not do well either, especially farmers who saw their commodity prices fall. This was a cause of discontent in the United States, which was severely exacerbated by the mid-1890s

The US had a double-dip recession from 1892–1894 and in 1895–1896 (see Davis 2006: 106), and much labour strife. This was set off by the Panic of 1893, a financial crisis which caused bank panics and collapses and the familiar pattern of a credit crunch, business failures and a spill-over into negative effects on investment, consumption, output and employment.

This can be seen in the graph below of Davis’s index of US industrial production. 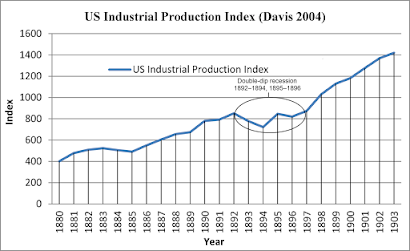 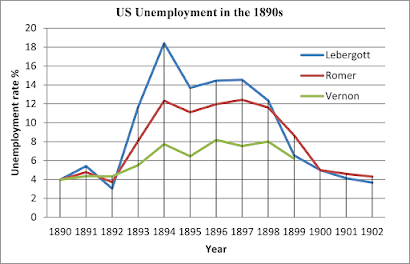 For various reasons, I think the real rate was probably somewhat closer to the estimates of Lebergott (see here).

By 1896 America was in turmoil. There was an angry public mood and the US was scheduled for a presidential election in November. The recession also caused an upsurge of populist discontent over the long-run deflation, especially from farmers in the Midwest and South, many of whom became supporters of the Free Silver Movement. The Free Silver movement and bimetallist political movement opposed the pure gold standard.

Enter William Jennings Bryan, who had been strongly associated with the Free Silver movement, and who had served in the US House of Representatives as a congressman for Nebraska between 1890 and 1894.

Many years later Bryan recorded parts of this speech for posterity:

The full speech can be read here.

Monetary issues were of great concern in this speech, but Bryan also expressed his support for the economic interests of farmers and workers, and he approved of the income tax.

Bryan had this to say on the issue of money:

“We say in our platform that we believe that the right to coin and issue money is a function of government. We believe it. We believe that it is a part of sovereignty, and can no more with safety be delegated to private individuals than we could afford to delegate to private individuals the power to make penal statutes or levy taxes. Mr. Jefferson, who was once regarded as good Democratic authority, seems to have differed in opinion from the gentleman who has addressed us on the part of the minority. Those who are opposed to this proposition tell us that the issue of paper money is a function of the bank, and that the Government ought to go out of the banking business. I stand with Jefferson rather than with them, and tell them, as he did, that the issue of money is a function of government, and that the banks ought to go out of the governing business.”
http://www.americanrhetoric.com/speeches/williamjenningsbryan1896dnc.htm

Bryan also took aim at the trickle-down economics of his era:

“There are those who believe that if you will only legislate to make the well-to-do prosperous their prosperity will leak through on those below. The Democratic idea, however, has been that if you legislate to make the masses prosperous their prosperity will find its way up through every class which rests upon them.”
http://www.americanrhetoric.com/speeches/williamjenningsbryan1896dnc.htm

The speech ended with a call for bimetallism, though in retrospect a platform calling for a central bank in America to stabilise the banking system with effective financial regulation would have been much more sensible (and later Bryan did support the Federal Reserve Act).

At any rate, the “Silver Democrats” swept the party and Bryan’s speech electrified sectors of the audience and secured him the Democratic nomination for the presidency. He was also chosen as the candidate of the American labour-based Populist Party and Silver Republican Party.

Bryan rose as an insurgent populist candidate against the Democratic elitist establishment on a wave of dissatisfaction – just like, for example, Bernie Sanders. I imagine some angry people supported Bryan more as a protest vote, rather than because they were wholeheartedly committed to his policies.

Elitist Democrats were horrified. The Republican establishment was horrified. William Jennings Bryan was subjected to merciless and endless attacks from the establishment press, as in this political cartoon by Grant Hamilton: 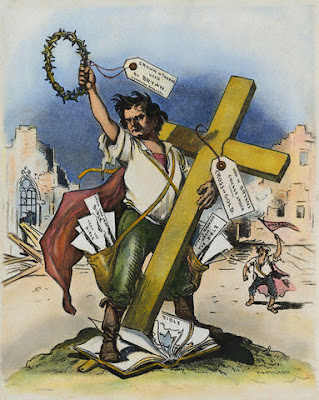 By modern standards, Bryan’s political platform was unusual, and from a heterodox economic perspective rather confused. However, the free silver movement was in some sense a demand for greater aggregate demand and an inflationary environment, partly in order to relieve debtors and debt deflation.

There was also a clear populist character to Bryan’s politics, though admittedly it came with a fundamentalist – indeed a kind of puritanical – Protestant Christianity, which, for example, opposed alcohol and gambling.

But, fundamentally, Bryan essentially began the transformation of the Democratic party from the party of laissez faire towards the “New Deal” Democrats of the 1930s:

“Bryan was the first leader of a major party to argue for permanently expanding the power of the federal government to serve the welfare of ordinary Americans from the working and middle classes .... he did more than any other man – between the fall of Grover Cleveland and the election of Woodrow Wilson – to transform his party from a bulwark of laissez-faire to the citadel of liberalism we identify with Franklin D. Roosevelt and his ideological descendants.”
https://en.wikipedia.org/wiki/William_Jennings_Bryan#Legacy

In the end, however, William Jennings Bryan lost the election to the Republican William McKinley (who supported the Gold Standard).

But, curiously, the popular vote was quite close, because McKinley gained 51% to Bryan’s 47% of the vote.

To some extent, William Jennings Bryan’s candidacy was spoiled by the establishment pro-gold standard Democrats who ran their own candidate, but it is also true that Bryan just couldn’t win over enough of the middle class, the skilled workers, and wealthier farmers.