The Natufians were a people in the prehistoric Levant from c. 12,500 to 9,500 BC who developed sedentary or semi-sedentary settlements to exploit wild cereals, and experimented in the early domestication of plants. Their descendants then eventually adopted the first agriculture after the Younger Dryas (c. 10,800–9,500 BC).

It is possible that the phenomenon of “plant nurturing” (deliberate actions to increase the reproduction and spread of plants for food) was practised by Pleistocene hunter-gatherers long before agriculture proper was invented (Willcox 2012: 164).

The extent of the Natufian culture can be seen in this map: 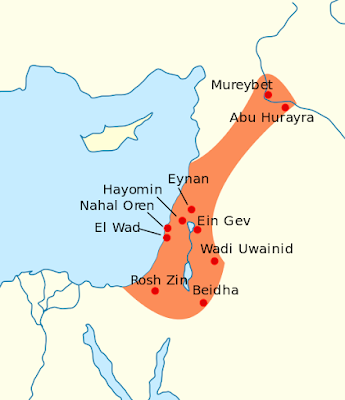 The early Natufians went through alternating phases of settled life and more nomadic periods in the Levant as follows:

From c. 13,000–c. 11,000 BC the Natufians lived in sedentary or semi-sedentary settlements in the Near East and harvested wild cereal plants, along with the usual hunting and gathering (Balter 2010: 404). This coincided with the Bølling-Allerød interstadial (12,700–10,700 BC), the first important warm and moist period after the end of the last glacial era. By this time, the Near East had changed from a treeless steppe during the Ice Age into a forest steppe environment with oak, olive trees, Pistacia atlantica, almond, grasses, and wild cereal vegetation.

But when the earth was plunged into the Younger Dryas (c. 10,800–9,500 BC), the climate became dryer and colder, a process which caused a crisis in the Natufian culture as they experienced a shortage of plant and animal sources of food (Balter 2010: 404).

It is possible that rye was already domesticated around the period 11,000–10,000 BC at the site of Abu Hureyra in modern Syria, and evidence of tilling and cultivating of wild strains of rye and einkorn exists at a near-by site of Mureybit in the same period (Zeder 2011: S224–S225).

At any rate, from 9,700 BC after the end of the Younger Dryas, the Holocene epoch of climate stability – with higher temperatures and regular rainfall – allowed the development of sustained cultivation and a reliable subsistence economy (Willcox 2012: 176–177).

During the early Holocene in the Fertile Crescent, agriculture developed in independent sites where people learned to domesticate local plants (Willcox 2012: 177). There were nine Near Eastern wild plants that were domesticated and cultivated by the early agriculturalists over hundreds of years of artificial selection: emmer wheat, barley, pea, lentil, flax, broad bean, bitter vetch, einkorn wheat and chickpea (Willcox 2012: 166–167).

Either emmer, einkorn, and pulses (and sheep, pigs, cattle, and goats) were first domesticated in the central Fertile Crescent, around the upper reaches of the Tigris and Euphrates rivers, or the process of domestication was more decentralised and occurred in multiple places around the Fertile crescent (Zeder 2011: S230).

It seems that the development of farming also had genetic consequences: whether farmers evolved a higher general intelligence or were less violent than foragers is unclear, but early farmers evolved gluten tolerance (Willcox 2012: 164), and may have evolved lower time preferences (or the ability to delay gratification; see Clark 2007: 186–187) in contrast to hunter gatherers.

A chronology of the Natufian and early agricultural revolution is as follows:

c. 21,000 BC – earliest known gathering of wild wheat and barley in the Near East at the Upper Paleolithic site of Ohalo II

c. 20,000 BC – the site of Ohalo II on Lake Lisan in north Israel is occupied with huts

c. 18,000–c. 10,900 – the Near East changes from a treeless steppe into a forest steppe vegetation of oak, olive trees, Pistacia atlantica, almond, grasses, and wild cereals

c. 18,000–c. 8,500 BC – the Epipaleolithic (or Mesolithic) period, the era after the end of the final glaciation until the Neolithic

c. 11,000–10,000 BC – rye possibly already domesticated at Abu Hureyra in modern Syria, with tilling and cultivating of wild strains of rye and einkorn at Mureybit, the earliest known domestication of crops

10,900–9,700 BC – mini ice age called the Younger Dryas causes sharp decline in temperatures over much of the northern hemisphere. Younger Dryas was triggered by vast meltwater probably from Lake Agassiz flowing into the North Atlantic, which caused disruption to thermohaline circulation

c. 10,900–9,700 BC – the Younger Dryas probably causes problems in Natufian culture from drought; Natufians abandoned settlements and became nomadic; some Natufians may have been driven to early cultivation of cereals

c. 10,000 BC – Jericho is a settlement, and before that a camping ground for Natufian hunter-gatherer groups

from 9,700 BC – the Holocene epoch climate stability (with higher temperatures and regular rainfall) allowed the development of sustained cultivation and a reliable subsistence economy probably in northern Syria and Jordan (where wild cereal strands were more difficult to find)

c. 9,500 BC – Pre-Pottery Neolithic A people in the southern Levant had developed small bins and larger storage silos systems for grain at Dhra’, Gilgal I, Netiv Hagdud, and Wadi Fidan 16

c. 9,500 BC – first phase of construction of the temple complex at Göbekli Tepe

9,500–7,000 BC – Göbekli Tepe in south-east Turkey is pre-pottery Neolithic A settlement with massive T-shaped stone pillars were erected, the world’s oldest known megaliths

c. 9,000 – sedentary agriculture develops in the Near East in the Holocene:

c. 8,500 BC – domesticated cereals such as einkorn, emmer, and barley imported into Cyrus; wild goats and cattle may have been brought in earlier

c. 8,200 BC – goats domesticated in the region from the east Taurus to the south Zagros and Iranian Plateau

c. 6,500–4,000 BC – Neolithic Anatolian farmers from northern Greece and north-western Turkey started migrate into central Europe through the Balkan route and then by the Mediterranean route to the Iberian Peninsula (see here)

c. 6,250–5,050 BC – in China, domesticated millet is farmed in northern China at Xinglonggou, Yuezhang, Dadiwan, Cishan, and several Peiligang sites

Bryce, Trevor and Jessie Birkett-Rees. 2016. Atlas of the Ancient Near East: From Prehistoric Times to the Roman Imperial Period. Routledge, London and New York.

Hayden, Brian, Canuel, Neil and Jennifer Shanse. 2013. “What was Brewing in the Natufian? An Archaeological Assessment of Brewing Technology in the Epipaleolithic,” Journal of Archaeological Method and Theory 20.1: 102–150.

Kuijt, Ian, Finlayson, Bill and Ofer Bar-Yosef. 2009. “Evidence for Food Storage and Predomestication Granaries 11,000 Years Ago in the Jordan Valley,” Proceedings of the National Academy of Sciences of the United States of America 106.27: 10966–10970.

Rosen, Arlene M. and Isabel Rivera-Collazo. 2012. “Climate Change, Adaptive Cycles, and the Persistence of Foraging Economies during the Late Pleistocene/Holocene Transition in the Levant,” Proceedings of the National Academy of Sciences of the United States of America 109.10 (March 6): 3640–3645.

Willcox, George. 2012. “Beginnings of Cereal Cultivation and Domestication in Southwest Asia,” in D. T. Potts (ed.), A Companion to the Archaeology of the Ancient Near East. Wiley-Blackwell, Chicester, UK. 163–180.

Labels: Natufians, origins of agriculture in the ancient Near East