Gregory Clark’s A Farewell to Alms, Chapter 1: A Summary

Gregory Clark contends that the most important long-run, historical reality of world history can be summed up in two ideas:

(1) from the earliest times of hunter-gatherers until roughly 1800 humanity was stuck in a long-run Malthusian trap: per capita wealth may have varied somewhat in different times and places, but there was no sustained, great upward trend in global per capita wealth. While some societies managed short-run economic growth even in per capita terms (and here the phrase “short-run” might mean as long as a century or so), nevertheless, in the long run, advances in per capita wealth by means of technological or other advantages were inevitably lost because of population growth.

(2) after 1800 the power of Western science, technology and the Industrial Revolution ended the Malthusian trap for Europeans and most of their colonial societies, and for much of humanity (Clark 2007: 1), though the Malthusian trap persists in some places.

The “broad-brush” economic history of the world, in the two ideas above, can be seen in this graph (which can be opened in a new window): 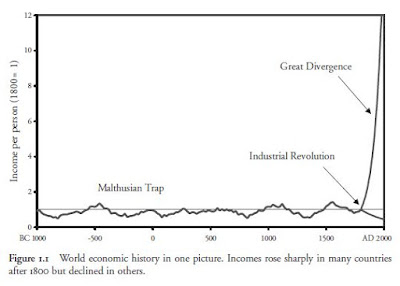 Clark (2007: 2) argues that, for the average person in 1800 (even in a place like Britain), life was not much better than in Stone Age hunter gatherer societies, a claim I find a bit absurd and exaggerated.

Nevertheless, the broad points about the historically important limitations of the Malthusian trap through much of history seem sound.

Clark (2007: 3) contends that, even today, in much of sub-Saharan Africa, the introduction of Western technology has not allowed all societies there to escape the Malthusian trap because of excessive population growth. Paradoxically, the Industrial Revolution has created a Great Divergence between the richest, industrialised nations and the poorest nations of the Third World (Clark 2007: 3).

Clark’s A Farewell to Alms seeks to answer three questions:

(1) Why did humanity remain trapped in a Malthusian world for so long?;

(2) Why did the first escape from the Malthusian trap happen in England? (and spreading to other countries in Europe);

Paradoxically – in a pre-modern world subject to Malthusianism – prosperous periods of peace, order, stability, public health, welfare to the poor, and economic growth stimulated the population growth that ultimately impoverished those societies and reduced per capita wealth (Clark 2007: 5). Hence fertility control was a major driver of improved material prosperity in pre-industrial societies (Clark 2007: 5).

Clark points to an important principle that is also stressed by Gregory Cochran and Henry Harpending’s The 10,000 Year Explosion: humanity was still subject to Darwinian evolution by natural selection in the Malthusian era, and even after the development of old agrarian societies after the Neolithic Revolution from 10,000 BC (Clark 2007: 6).

As an aside, it is very interesting that Charles Darwin was driven to one of his most important insights into biological evolution by reading Thomas Robert Malthus’ An Essay on the Principle of Population (first published in 1798; revised 2nd edn. 1803; 6th edn. 1826) in 1838 in the sixth edition (Desmond and Moore 1991: 264–265), during a terrible depression in England:

Darwin and Wallace discovered evolution by natural selection not long before the horrors of the Malthusian world were finally ending for the European peoples.

And this leads us directly to Clark’s thought-provoking hypothesis about the possible evolution that people in England experienced from 1250–1800:

(1) because of wealth inequality and the emergence of a rich productive middle class, economic success in England translated into powerful reproductive success;

(2) since in England the richest families generally had twice as many surviving children as the poorest families, the poor in Malthusian England gradually died out through differential birth and survival rates (a simple foundational principle of evolution);

(3) pre-industrial England was therefore a society of constant downward mobility, in the sense that the children of the elite and wealthier classes, on average, moved downwards in the social hierarchy in order to live and find work (Clark 2007: 7).

So therefore the general genetic traits of the wealthier classes in England – plausibly likely to be higher intelligence, patience, hard work, innovativeness, and low time preference – were thus spreading genetically throughout the population for centuries as a pre-condition for the Industrial Revolution (Clark 2007: 8).

The same type of genetic changes may well have happened in other mercantile, commercial societies where the success of people with given biological traits led to long-run reproductive advantage and general evolutionary change.

As the Industrial Revolution – with its application of major technological advances to production – transformed European societies, fertility declined. This can be seen in the graph below:

As we can see, there was a sharp fall in the fertility rate throughout the West from the 1870s, but this accelerated the declines that were already underway after about 1800. Shockingly, some nations like Britain and Germany even had sub-replacement fertility rates below the magic rate of 2.1 even by the 1920s/1930s.

As Clark points out, it was not just the rapid and historically unparalleled economic growth that broke the Malthusian trap for Europeans, the falling fertility rate also was a major factor in the rising real per capita GDP and wealth of the West (Clark 2007: 8).

Clark also argues that the explanation for the emergence of the Industrial Revolution in England requires a complex set of factors in the long-run from 1250–1860 (Clark 2007: 10).

Crucially, Clark even argues that the whole economic history of humanity must be set within possible differential evolution of human beings in different societies, not only in terms of culture, but also under different selective pressures. Above all, Old Agricultural Societies may have produced people with different genetic and behavioural traits from other peoples (Clark 2007: 10).

Why did an Industrial Revolution occur in England in the time it happened, and not in China or Japan? Whether natural resource advantages in coal, or colonies, or cultural changes of the Protestant Reformation contributed, Clark thinks that evolutionary change brought about by demographic trends in England, both in culture and possibly genetics, created a people who were also a fundamental condition for the Industrial Revolution (Clark 2007: 11).

Finally, Clark turns to the Great Divergence and the persistence of failed economic growth in parts of the Third World, and thinks that failure to adapt to the cultural values and institutions of the industrialised societies are major factors. Here the discussion suffers from Clark’s ignorance of left heterodox and Post Keynesian economics.

Labels: A Farewell to Alms, Chapter 1: A Summary, Gregory Clark