Ever since Gamergate, there has been a new-found hostility to SJWism, Cultural Leftism, and Third Wave feminism amongst some Liberals and leftists, especially the young.

The most popular of these are probably Sargon of Akkad and Dave Rubin.

The ideology of these latter two is rapidly degenerating into Classical Liberalism and libertarianism-lite, because they lack any alternative perspective on economics. For them, being hostile to SJWism, Cultural Leftism and Marxism has meant becoming hostile to any kind of economic leftism. They seem oblivious of non-Marxist, leftist economics like Post Keynesianism, or even leftist New Keynesianism.

Sargon, for example, has taken to denouncing “socialism” on Twitter, but seems incapable of properly defining what he even means by it. For him – as for libertarians – it seems to conflate everything from New Deal Liberalism, the old British Labour Party, Keynesianism, and Marxism/Communism with a centrally planned economy.

But, don’t get me wrong, some of the memes against Marxists/Communists are fairly funny, e.g.: 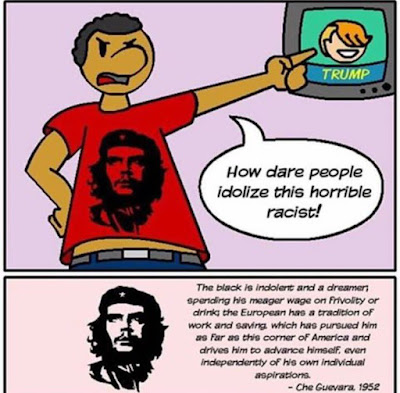 However, Sargon has little knowledge of economic theory, and also adopts the same infantile tactic of libertarians by throwing the word “collectivist!” out as an insult in the same way as the libertarians perennially use the cry of “statist!” to close down discussion.

But I’ve seen all this before.

When the financial crisis of 2008 and global recession of 2009 hit the world, there was a brief revival of Keynesian economics. That in turn provoked a renaissance of internet Austrian economics bloggers and libertarianism from around 2008.

From about 2008–2014, there were massive blogger and internet wars between Austrians/libertarians and Keynesians, and heterodox and Post Keynesians were part of this. All these economic issues were debated ad nauseum, and all the solid arguments against Austrian theory were made by numerous people.

But people like Sargon of Akkad and Dave Rubin seem ignorant of this, or of any serious critics of Classical Liberal economics.

The resurgent Austrian/libertarian ideology of the early 2010s reached its high-point in the presidential campaigns of Ron Paul. The Tea Party also had its libertarian wing too.

But then this libertarianism imploded.

There is considerable evidence that a lot of these libertarians – especially the young men – went on to found and become the Alt Right.

Probably some of them still have libertarian leanings on economics. But a big development within the Alt Right has been a growing hostility to free market and libertarian economics, because, whatever you want to say about them, they are at least capable of doing some independent thought on economic issues. Many – who, I bet, were once the fanatical libertarians you’d argue with on Mises.org or Austrian blogs – are now openly hostile to free trade and globalisation.

Thus Richard Spencer – who may as well be the public face of this movement – was capable of saying this recently about socialism:

But now, on economics, people like Sargon of Akkad are falling into the space once occupied by libertarians, and shilling for Hayek (see here and here), and essentially providing little except anti-SJWism and a reversion to a failed economic ideology.

As a person who spent years arguing with libertarians and Austrians after 2008 from a Post Keynesian perspective, you can get a detailed refutation of nearly every flawed aspect of Austrian economics here:

If you are a Sargon fan, but skeptical of his turn to Austrianism, I encourage you to read these links, and this blog. I’m also on Twitter as “Lord Keynes.”

If Sargon of Akkad cares to do some basic reading, he’d discover the errors and discredited theories of Austrian economics.

The new “Classical Liberalism” being pushed by Sargon and co. is no substitute for an Alternative Left capable of criticising the excesses of the Cultural Left and the multiculturalists, but with Post Keynesian economics.

“Sargonism,” if we can call it that, is an intellectual dead end, and a Hayekian-lite rehash of the libertarian movement of the early 2010s. Don’t be seduced.

I’m on Twitter:
Lord Keynes @Lord_Keynes2
https://twitter.com/Lord_Keynes2
Posted by LK at 5:23 AM

Labels: The Anti-SJW Left should not be Hijacked by the New Classical Liberalism