The Single Best Argument against Anarcho-Capitalism

The anarcho-capitalism system proposed by Murray Rothbard requires the abolition of government and the privatisation of all property and every service in society.

For example, the anarcho-capitalism system abolishes the state and all state-based criminal law, and there would no longer be any criminal laws at all (see here and here).

Under anarcho-capitalism, property rights become almost absolute, except for when someone may sue in private civil litigation under a system of private torts.

Apart from that limitation, there is complete freedom of capital to produce, manufacture and sell anything to anybody, under free and voluntary contracts.

So what is the single best argument against such a system?

It seems fairly straightforward: with no government regulations whatsoever on the production and sale of not only guns, but also advanced military weapons, chemical, biological, and nuclear weapons, it follows that anybody at all wealthy enough, any lunatic or religious fanatic with enough money, can freely go and freely buy weapons of mass destruction, without anyone stopping them, in a Rothbardian anarcho-capitalist world.

In other words, capitalists are free to sell weapons which could then be used to pretty much destroy the earth and human civilisation.

Just look at the Middle East today, and imagine how it would work in the modern world.

But, then, when you are an anarcho-capitalism lunatic, I expect global nuclear holocaust is a lesser evil than violation of private property rights. 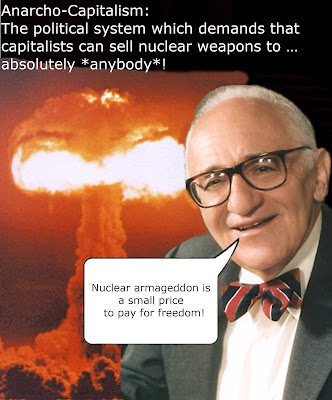