The last complaint is that there needs to be a line from Marxism (I assume via Michał Kalecki) to Post Keynesianism.

So now we have this third version, which needs to be opened in a separate window: 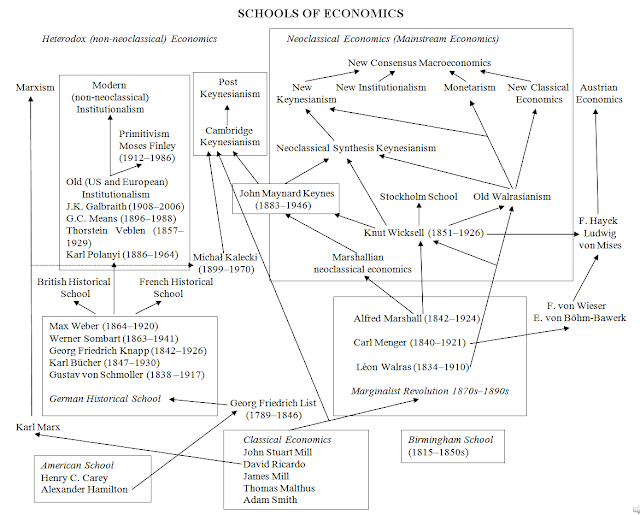 However, the link to Marxism should not be exaggerated.

It is important to remember that Michał Kalecki rejected the labour theory of value (LTV), and we know this from the Polish Marxist economist Włodzimierz Brus, who knew Kalecki personally in Poland:

“While recognizing the enormous significance of the Marxist approach and of many Marxian tools of economic analysis, Kalecki never felt that he had to accept every component of Marxian economics or to retain those parts of it which have become obsolete in view of new experience and of the progress of economic theory. He felt, for example, a strong distaste for the Marxian theory of value, which he considered metaphysical and (if I am not mistaken) never wanted to discuss.” (Brus 1977: 59).

Given that the LTV is the foundation of Marxist theory, it is obvious that Kalecki was a highly unconventional Marxist.

There is also a line that runs from Classical Economics to Post Keynesianism, owing to the influence of Piero Sraffa.

I also had complaints about my placement of Karl Polanyi. In retrospect, I think he does belong with the Old (American and European) Institutionalists, and has been put there now.

A further offshoot of Old Institutionalism was the Primitivist tradition in ancient economics, the leading figures of which were Karl Polanyi (1886–1964) and Moses I. Finley (1912–1986). I have added Moses Finley and Primitivism.

Moses Finley wrote a highly influential book on the economies of ancient Greece and Rome called The Ancient Economy (1973; rev. edn. 1999), which rejects many aspects of modern neoclassical economics and is firmly in the Old Institutionalist tradition (although some of Finley’s more extreme views are no longer held even by modern Institutionalists).

I hope this satisfies people, because there’s no more room on the diagram.