A Revised Diagram of Schools of Economics

I was pleased to see my older diagram used here in a critique of Noah Smith.

Some people pointed out that Knut Wicksell, given his influence, needs to be included in the diagram. That is true.

So I have revised the diagram as follows (open in a separate window to see it properly): 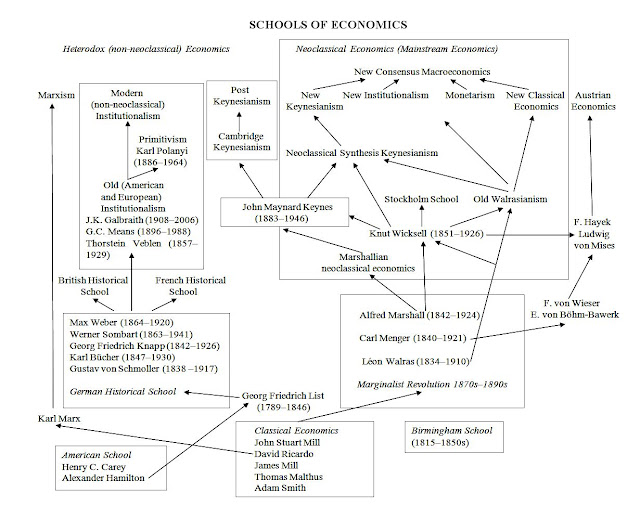 For good discussion of Wicksell’s theories, see Axel Leijonhufvud “The Wicksell Connection: Variations on a Theme” (1981), Colin Rogers’ Money, Interest and Capital: A Study in the Foundations of Monetary Theory (1989), and David Laidler’s Fabricating the Keynesian Revolution (1999).

Knut Wicksell’s development of the loanable funds theory with the natural rate of interest has been one of his most influential contributions to economics.

For Wicksell a market economy has a long-run tendency to monetary equilibrium, and his monetary equilibrium approach was adopted and developed in diverse ways by many important schools: namely, the (1) the Stockholm School; (2) the Marshallian neoclassical school, (3) the Austrians and (4) the modern New Consensus macroeconomics.

I’m on Twitter:
Lord Keynes @Lord_Keynes2
https://twitter.com/Lord_Keynes2
Posted by LK at 3:26 AM