The Alt Right: A Quick Overview

Hillary Clinton’s recent speech mentioning the Alt Right has grabbed headlines, and now it seems everyone is talking about the Alt Right. It’s bloody everywhere.

Moreover, Milo Yiannopoulos (until recently anyway) was not really Alt Right either, and he is more a cultural libertarian who hates political correctness and feminism, and was a mere “fellow traveller” of the Alt Right (though he now seems to be claiming the mantle). And even the Infowars.com quasi-libertarian Paul Joseph Watson seems to be identifying as Alt Right now.

In reality, a lot of the hardcore of the Alt Right seems to hate Milo Yiannopoulos and keep their distance from Breitbart (which they regard as being too soft), however.

If you want to understand the Alt Right, go and read their blogs and listen to their YouTube channels:

If there are core principles that seem to unite the Alt Right, they are as follows:

(1) race realism, as pointed out by Jared Taylor in the Guardian.

You can see this from how they promote themselves:

This is often combined with an open demand for authoritarianism (or very limited democracy), Holocaust denial and admiration of Nazi Germany.

And, yes, these people really do have a bizarre and pathological obsession with Jewish people and anti-Semitic conspiracy theories, e.g., their meme of the Triple parentheses.

The left should strongly oppose the Alt Right, but I fear the cultural left will do a feeble job of doing it.

Why? Because once you ditch the crazed aspects of the Alt Right, some of these people – like the populist right – are raising real issues like the failure of neoliberalism, open borders, and multiculturalism. But they are going in the wrong – and a disastrously wrong – direction.

What does the Alt Right represent?

I keep telling people: the major development here is that the American Alt Right marks the continuing collapse of the American libertarian movement. Although some, maybe quite a few, were former liberals too, nevertheless more and more libertarians are gravitating to the Alt Right.

But, at the same time, there is a strange schizophrenia to the Alt Right on economics. All of them at least recognise that open borders would be catastrophic, and so they have abandoned this.

Broadly, from what I have seen, they are divided into the following groups:

(1) a group that have retreated to something like Hans-Hermann Hoppe’s views but are statists who accept a national government with national borders for a white ethno-state.

(2) a statist group who want a white ethno-state but with pragmatic economics, even though emotionally they seem to like Ron Paul-style libertarian or Austrian economics.

(3) a statist group who want a white ethno-state but who are left-wing on economics.

In fact, one could go so far as to say that the left-wing of the Alt Right are basically National Socialists, and, most probably, they will break with the libertarian wing eventually.

But, on the other hand, they have a wing that still loves much of the libertarian economic theories created by (gasp!) Jewish intellectuals like Ludwig von Mises and Murray Rothbard: 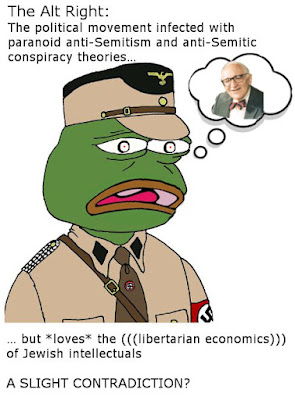 I dunno, dudes. Did you put any thought into this lame-ass movement? Was this just a minor oversight?

P.S. the cartoon is facetious trolling of the Alt Right, by subverting their memes, not trying to blame libertarianism on the Jewish people. Don’t make me point this out in the comments section!