Long-time commentator Ken B has drawn my attention to this post by Gene Callahan that complains that the Turing Test doesn’t really test for real intelligence.

In essence, I actually agree on this point, though I would reject Callahan’s dualism.

(1) machines have intelligence and can think.

(2) a Turing test can show whether a machine has intelligence and can think.

Do you mean the conscious intelligence and thinking that I am experiencing right now? Actually, there is no good reason to think software can think in this way, because (3) is unproven and a non sequitur.

The conscious thinking intelligence that humans have is most probably a higher-level emergent property from specific biological processes in the brain.

As the analytic philosopher John Searle points out in the video below, all the empirical evidence suggests that consciousness is a biological phenomenon in the brain causally dependent on neuronal processes and biochemical activity, but one that can be explained by physicalist science, not some discredited supernatural ideas about souls or Cartesian dualism (see also Searle 1990; Searle 2002; Searle 1992).

Now the crude behaviourist Turing test does not test for whether an entity has conscious life, but merely whether it simulates human intelligence. Thus even if future computers all start passing Turing tests, it is not going to be some shocking milestone in human history: all it will show is that software programs have become sophisticated enough to fool us into thinking machines have conscious minds as we do, even though they do not.

Searle’s famous Chinese room argument is a devastating blow to the cult of AI.

But there are some additional philosophical points here. There is nothing supernatural about saying that, physically speaking, you need brain chemistry to produce a conscious intelligent mind.

And, philosophically speaking, the key to cracking the problem of human conscious intelligence is Karl Popper’s pluralist ontology. This is not a supernaturalist ontology, but naturalistic.

The key to understanding complexity in our universe is this: emergent properties. Karl Popper’s Three World Ontology gives us the best conceptual framework in which to understand our universe and the human mind.

Now this is where Searle goes philosophically wrong: his adherence to a crude monist materialism. Searle is unwilling to accept that (1) some emergent properties – like the human mind – are so remarkable that they make a new ontological category, and (2), because of (1), we have good reason to consider Popper’s three worlds ontology as a realistic metaphysics.

So what is Karl Popper’s pluralist ontology?

Karl Popper’s Three Worlds system is a pluralist ontology that classifies all objects in our universe, even though it is quite different from dualism. Ultimately, all objects in Popper’s world are causally dependent on matter and energy and their relations and permutations, so that – despite being ontologically pluralist – it has a fundamentally naturalist and physicalist/materialist basis.

We can set out the Three World Ontology in the following diagram. 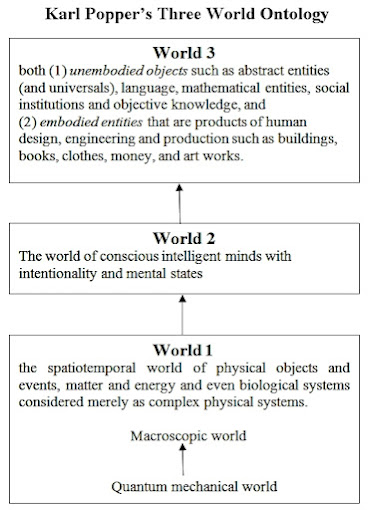 World 1 give rises to World 2 objects, and World 2 in turn gives rise to World 3 objects, World 2 and World 3 being emergent properties from the each lower-level world respectively.

These three worlds can be described as follows:

World 1: the fundamental world of spatiotemporal physical objects and events, matter and energy and even biological systems considered merely as only complex physical systems. It further divided into a fundamental distinction between:

(1) the world of quantum mechanics, and

(2) the macroscopic world of Newtonian physics and Einstein’s special and general theories of relativity.

In some manner that is not properly understood our macroscopic world is an emergent property from the world of quantum mechanics.

World 2: the world of conscious intelligent human minds with intentionality and mental states (and, for example, any alien minds as complex as ours that have evolved on other planets, if they exist). True conscious intelligence is a property of minds in this world.

(1) unembodied objects such as abstract entities (and, most probably, universals), mathematical entities, social institutions and objective knowledge, and
(2) embodied entities that are products of human design, engineering and production such as buildings, books, clothes, money, and art works considered as human objects.

The conscious intelligent human mind is an emergent property from World 1 brain states, but is so powerfully unique it requires a new ontological category.

A true artificial intelligence that would have the same type of conscious intelligent mind as the human mind will have to directly reproduce or replicate the biological processes in the brain that cause consciousness. An “artificial” intelligence – in the sense of not being a normal human being – will probably need to have organic or biochemical structures in its “brain” in order for it to be fully and truly conscious.

Such entities, if they were fully conscious, would create all sorts of ethical issues. They would probably have to be imbued with moral/ethical principles as humans are, for example. Probably they would have to be granted some kind of human rights at some point, so that we could not treat them as slaves. And what would they do? What work would they perform?

The whole notion that your desktop computer could become as conscious as you are should be a horrifying thought. Wouldn’t it effectively be a slave?

At any rate, the whole issue of whether truly conscious artificial intelligence can be created is a matter for a future science that has first completely mastered what human (and higher animal) consciousness actually is.

To return to the issue of ontology, Popper summed up his system as follows:

“To sum up, we arrive at the following picture of the universe.

There is the physical universe, world 1, with its most important sub-universe, that of the living organisms.

World 3, the world of the products of the human mind, emerges as an evolutionary product from world 2.

The feedback effect between world 3 and world 2 is of particular importance. Our minds are the creators of world 3; but world 3 in its turn not only informs our minds, but largely creates them. The very idea of a self depends on world 3 theories, especially upon a theory of time which underlies the identity of the self, the self of yesterday, of today, and of tomorrow. The learning of a language, which is a world 3 object, is itself partly a creative act and partly a feedback effect; and the full consciousness of self is anchored in our human language.

Our relationship to our work is a feedback relationship: our work grows through us, and we grow through our work.

This growth, this self-transcendence, has a rational side and a non-rational side. The creation of new ideas, of new theories, is partly non-rational. It is a matter of what is called ‘intuition’ or ‘imagination’. But intuition is fallible, as is everything human. Intuition must be controlled through rational criticism, which is the most important product of human language. This control through criticism is the rational aspect of the growth of knowledge and of our personal growth. It is one of the three most important things that make us human. The other two are compassion, and the consciousness of our fallibility.” (Popper 1978: 166–167).

At any rate, Popper’s three world ontology has the following virtues:

(1) it avoids the fallacy of strong reductionism;

(2) it is compatible with a moderate realist or conceptualist view of abstract entities and universals;

(3) it understands that human minds are an important, real entity in the universe and is consistent with John Searle’s biological naturalist theory of the mind, even though minds are a type of emergent physical property (for why Searle is not a property dualist, see Searle 2002);

(4) it is compatible with the finding of modern science that emergent properties are a fundamental phenomenon in our universe;

(5) it is compatible with downwards causation;

(6) it is ultimately consistent with the view that higher-level worlds are causally dependent for their existence on lower-level worlds.

Jesper Jespersen (2009) uses Popper’s three worlds ontology in his Critical Realist methodology for Post Keynesian economics, and it is highly relevant for the ontological and epistemological basis of economics.

Searle, John. R. 1990. “Is the Brain a Digital Computer?,” Proceedings and Addresses of the American Philosophical Association 64: 21–37.