The libertarian commentary is attempting to deny that monetary policy had a significant role in the recovery of 1921.

In response to this, it can be said, firstly, that the American banking and financial system did not collapse in 1920–1921, as in 1929–1933. Confidence in banks was, more or less, maintained. An important reason for this was undoubtedly the Federal Reserve banking system acting as a lender of last resort with its discounting policy in 1920 to an extent sufficient to avert a mass panic and bank runs, as argued by Wicker (1966: 223). Indeed, the evidence shows that the number of bills discounted by Federal Reserve banks soared until nearly the end of 1920. This fact alone is enough to damn the idea that the recovery from recession in 1921 was unaided by significant government intervention. Without a basic lender of last resort in 1920, admittedly following the classic guidelines of Bagehot to lend at a penalty rate to businesses in distress, it is unlikely recovery would have been so easy or rapid in 1921.

To some extent too, the US economy was just lucky in 1920–1921: discount rate policy proved sufficient to avert banking collapse (instead of bailouts and much more radical intervention that was required in 1929–1933 but not done), the economy was not hit by the type of debt deflation (except perhaps to some extent amongst farmers) as it was in 1929–1933, nor were financial markets affected by the collapse of a massive debt-fuelled asset bubble as in 1929, nor were aggregate demand shocks as bad either. Even the price deflation was partly, and perhaps even significantly, the result of positive supply shocks after the end of WWI and the resumption of shipping, trade and production (Romer 1988: 110; Vernon 1991), not simply from severe aggregate demand shocks. 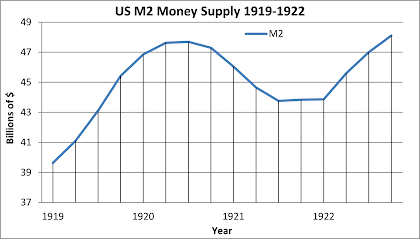 In contrast, M2 contracted by an incredible 35.31% between 1929 and 1933, as credit contraction, bank runs and over 9,000 US bank failures (Wells 2004: 51) destroyed demand-deposit money and savings held by the public, while the 1920–1921 recession did not have such mass bank runs or liquidity crises in banks (Friedman and Schwartz 1963: 235), and even if some bank failures did occur one wonders whether the M2 monetary contraction was caused more by negative credit growth than by loss of deposits.

Another point that seems to be ignored is that the Federal Reserve system embarked on a proto-form of quantitative easing from late 1921 in which the Federal Reserve banks bought government bonds from November 1921 to June 1922 and tripled such holdings from $193 million in October 1921 to $603 million by May 1922 – a fact even noted by Rothbard (2000: 133), who complained that, to the Federal Reserve officials, “[i]nflation seemed justified as a means of promoting recovery from the 1920–1921 slump, to increase production and relieve unemployment” (Rothbard 2000: 133). Strange how modern libertarians seem to have forgotten this.