The evidence is very strong that British business people were complaining bitterly of a “profit deflation” by the 1880s during the deflation of 1873 to 1896. This was a major cause of depressed and pessimistic business expectations.

But the crucial question arises: did this affect aggregate investment in this period?

We can look at some data on UK gross domestic fixed capital formation in this era.

The following graph shows UK gross domestic fixed capital formation in millions of pounds at current prices from 1850 to 1913, so we can see the long-run trend (with data from Mitchell 1988: 831–833, National Accounts 5, which is based on Feinstein 1972). The trend of falling and stagnant investment after 1873 to the later 1880s is stark and leaps out of the data. Of course, this data is in current prices, and, given that factor costs must have fallen, is the data here misleading? Do constant, inflation-adjusted prices show a different trend? 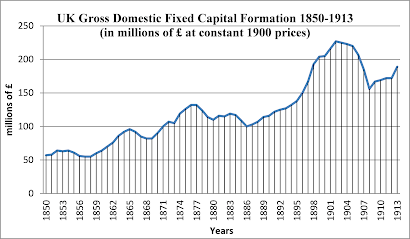 Once again we see much the same trend, even if not so pronounced.

UK real gross domestic fixed capital formation began a sharp drop after the post-1873 deflation commenced, and even during the recoveries around 1880–1884 and 1886–1890 it grew only at a markedly low rate or even essentially stagnated.

The mid-Victorian boom ended in the early 1870s, and (because of price deflation) real gross domestic fixed capital formation reached an inflation-adjusted value of £132 million in 1876, and then began a downward trend until the late 1880s. It did not attain the 1876 peak again until 1894. 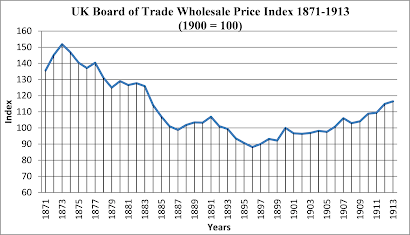 The brief return to inflation might have contributed to the beginnings of a long-run recovery in business confidence in the late 1880s. However, what recovery in investment that occurred looks weak and it was derailed by the deflationary recession of the 1890s.

At any rate, the really strong recovery in investment happened after 1896 when the deflation ended and an inflationary boom developed until the outbreak of World War I.

All in all, I would say that the evidence supports the view that the great deflation was not a period of a healthy, robust economy in Britain. As we have seen, contemporaries noted the phenomenon of “profit deflation” and loss of business confidence.

Post Keynesians argue that the aggregate level of investment is strongly affected by business expectations and that such expectations are subjective, given the fundamental uncertainty that economic agents face.

These insights can clearly be applied to the 1873–1896 era: price deflation with increasing downwards nominal wage rigidity caused a fall in profits by the 1880s.

Though probably not the only reason, it was nevertheless one major cause of loss of business confidence that in turn caused business people to reduce the aggregate level of investment.

Such a Post Keynesian view of the trend of falling investment in this era is the best explanation in my view. And it does not suggest that deflation is a benign and healthy phenomenon, despite what its advocates think.