Samuel B. Saul’s The Myth of the Great Depression, 1873–1896 (2nd edn. 1985) analyses the 1873 to 1896 deflationary period from the perspective of Great Britain. Saul raises many questions in this book, such as the question whether we are justified in considering 1873–1896 as a unified period of economic importance, and what causes produced the general deflationary trend.

Of course his major conclusion was that there was no actual continuous depression throughout the period, that real output at the end of the period was higher than at the beginning (Saul 1985: 54), and that the term “Great Depression” should not be used of the period (Saul 1985: 55). Furthermore, some of the trends visible in the 1873–1896 period continued afterwards and perhaps the downwards trend in prices was already underway in the 1860s and may, in some respects, have ended in the late 1880s (Saul 1985: 54). Overall the 1873–1896 period may not be a unified and historically significant era in the way previous economic historians thought (Saul 1985: 54–55).

Nevertheless, Saul also found that there were economic problems within the period (Saul 1985: 54), and a careful reading of the book shows that it presents problems for the advocates of price deflation.

I have summarised the main points and findings of Saul’s book below.

Landes (1965), for example, argued that the whole period from 1815 to 1897 was essentially a unified period displaying a long-run downward trend in prices, with a plateau in prices in the middle, driven by technological advances and positive supply-side factors (Saul 1985: 13).

Nevertheless, to many historians and economists there is also something anomalous about the 1873 to 1896 deflation.

Saul (1985: 15) raises the possibility that there was an overall major factor driving the deflation until the late 1880s, but thereafter perhaps no general overall factor driving it. In fact, this was the view of Keynes in the Treatise on Money (1931), and Keynes saw monetary factors as the general cause of the deflation until the late 1880s, and then a different explanation for the 1890 to 1896 deflation (Saul 1985: 17).

Both at the time and continuing to this day, there have been two main explanations offered for the late 19th century deflation:

(2) a quantity theory of money explanation, either through (i) the modern neoclassical quantity theory or (ii) one stemming from the quantity tradition in Classical Economics, where the cost of production of gold was assumed to also influence changes in its “price”.

The second neoclassical quantity theory explanation has numerous supporters and certainly amongst monetarists, and it became popular by the 1980s (Saul 1985: 60). This explains the phenomenon as having been caused by the failure of the money supply to grow at a rate consistent with the growth in economic activity.

The second explanation sees the deflation as caused mainly by price falls in many goods from technological factors, innovative production techniques driving down costs and positive supply side factors. For example, freight rates on shipping from America to Britain and to the Continent fell sharply in the 1880s (Saul 1985: 22), as did overland freight rates too (Saul 1985: 23). Many agricultural goods saw price falls as production in the Americas, Australia, New Zealand, and South-East Asia increased markedly and transport costs fell.

In the end, Saul himself preferred an eclectic, not mono-causal, explanation of what caused the deflation that draws on many factors (Saul 1985: 26–28, 55).

But what about the economic problems that resulted from the deflation?

UK wages tell a very interesting story. Money wages fell from 1874 to 1879, but thereafter, despite long-run price deflation, were either stable or actually rose (apart from a brief and small fall from 1884 to 1886) (Saul 1985: 31). Real wages also rose virtually continuously from 1873 to 1896, apart from small falls from 1876–1878, 1879–1880, 1883–1884, and 1890–1892. It is clear that workers were able to maintain money wages even in the deflationary years and even during the recession of the early 1890s: in fact, in this period the share of income going to labour increased at the expense of profits (Saul 1985: 32–33, 63). This strongly confirms what contemporaries were saying: that the 1873–1896 period was marked by “proft deflation” or a profit squeeze that left business people highly pessimistic. While one cause of this for exporting industries is usually taken to be the slower growth of exports in the late 1880s (Saul 1985: 63), a fundamental cause must also have been price deflation and a significant degree of downwards nominal wage rigidity.

There emerges a further crucial point from the “profit deflation” phenomenon of these years. In Britain, it appears that a major source of business and industrial finance in the late 19th century was retained earnings out of profits (Saul 1985: 41). Saul adduces evidence that the share of profits out of industrial income fell as the deflation of 1873–1896 proceeded (Saul 1985: 42, citing Feinstein 1959), as can be seen in the following graph. 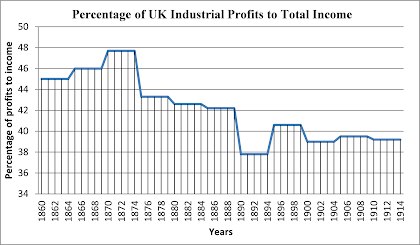 As we can see, the inflationary boom of the mid-Victorian age (1850–1873) saw rising levels of profits, but when the long-run deflation occurred, the percentage of profits of total industrial income fell significantly. It is possible too that what we would now call UK capacity utilisation rates fell in the late 19th century in this period (Saul 1985: 43, citing Ashworth 1966).

Saul blames institutional factors, the negative legacy of Britain’s “early start” in industrialisation, and the decline in Britain’s overseas export markets in the late 19th century for its failure to innovate and its lower levels of investment (Saul 1985: 51).

But he also points to another important explanation: it can be argued that, given that UK investment was financed out of retained earnings to an important degree, the price deflation led to a falling profit rate given relatively inflexible wages so that this probably adversely affected aggregate investment and expectations (Saul 1985: 53–54). This actually stands out as one of Saul’s most important conclusions (Saul 1985: 53–54).

So the effects of the “profit deflation” on business expectations were significantly negative, which probably caused increasing pessimism and unwillingness to invest. Saul, however, does not address the issue of debt deflation as a cause of business pessimism, but it may have been an important factor, and there seem to be hints from contemporaries like Alfred Marshall that it was a factor.

Finally, recent estimates of UK unemployment in the late 1800s show that significant unemployment did exist for much of this period, as can be seen in the graph below (with data from Boyer and Hatton 2002). 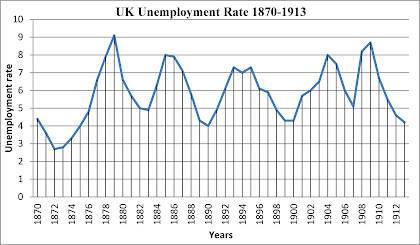 Beckworth, David. 2007. “The Postbellum Deflation and its Lessons for Today,” The North American Journal of Economics and Finance 18.2: 195–214.