The Price of Asset Bubbles in Housing

An article that caught my eye in the Independent:

Andrew Grice, “Half of Young Adults will Live with their Parents within a Generation from Now,” Independent, 1 May 2014.

In essence, the price of houses in the United Kingdom is so high that soon many of the young will be forced to live with their parents rather than be able to afford to buy a house.

What is missing from the story is the crucial point that this is mainly the consequence of UK asset price inflation in housing: this is a housing bubble.

As Steve Keen notes here, the UK has had the “Big Daddy” of housing bubbles with “a fourfold increase in real house prices since the late 1960s.”

This can be seen in the graph below. 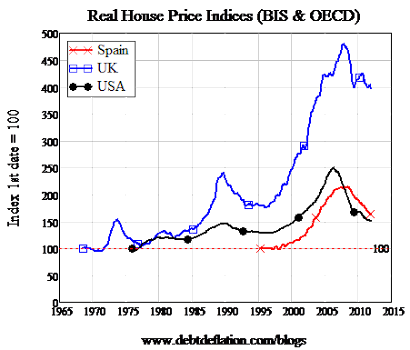 The bubble clearly began under Thatcher. In fact, Thatcher’s UK was a trailblazer of asset bubbles in the neoliberal era: Thatcher’s financial deregulation – an important element of which was the Big Bang (1986) – contributed to the so-called Lawson boom (1986–1988), at the centre of which was a debt-financed property bubble. When this collapsed in the late 1980s, a debt deflation ensued in the UK in the early 1990s recession (Stewart 1993: 56–57, 101–102).

But this was just a minor harbinger of the tremendous bubble that exploded under New Labour (in power from 1997 to 2010).

The terrible price of this bubble is simply: many people will not even be able to afford a house if it continues.

Update
Philip Pilkington has an excellent post here pointing out the problems with the data from the BIS Property Price index as used by Steve Keen, and with better data from the Nationwide House Price Index:

The question whether the UK is in a property bubble now is difficult to call, and Philip speculates that the UK may develop into a new rentier society with property increasing owned by the rich and rented to lower income earners.

BIBLIOGRAPHY
Stewart, Michael. 1993. Keynes in the 1990s: A Return to Economic Sanity. Penguin, Harmondsworth.
Posted by Lord Keynes at 1:58 AM