Mises and the Great Depression in Austria

The final section of this article by Richard Ebeling provides a brief Austrian review of the subject.

There is a lot more that could have been said (especially on the Austrian hyperinflation), and none of it very flattering to Mises.

Take the actual policies implemented in the 1930s by the Austrian government and Mises’ connection to this.

Austria actually had the worst depression in Europe with a real GNP loss of 22.45%.

The Austrian politician Engelbert Dollfuss became Chancellor of Austria in May 1932. In March 1933, Dollfuss effectively abolished democracy, and established an authoritarian Austro-fascist regime, but was assassinated in July 25, 1934 and replaced by another dictator called Kurt Schuschnigg, who was Chancellor from July 1934 to the Anschluss in March 1938. While Dollfuss engaged in some limited interventions in the economy, mostly he seems to have pursued deflationary austerity.

Hans-Hermann Hoppe (an Austrian economist) relates that Mises was a close adviser of Dollfuss:

“Engelbert Dollfuss [sc. was] ... the Austrian Chancellor who tried to prevent the Nazis from taking over Austria. During this period Mises was chief economist for the Austrian Chamber of Commerce. Before Dollfuss was murdered for his politics, Mises was one of his closest advisers.”
Hans-Hermann Hoppe, “The Meaning of the Mises Papers,” Mises.org, April 1997

Even after his move to Geneva in 1934, Mises was still employed by the Austrian government, visited Austria periodically, and continued to do work for the government (Hülsmann 2007: 884).

So Mises was giving policy advice to Dollfuss and possibly Schuschnigg, and I assume that it was they should pursue austerity.

The historical studies on Austria in this period suggest that Dollfuss appears to have taken most of this advice to heart.

So how did the austerity work out for Austria?:

You can see the proof of this in the graph below of unemployment in Austria in the 1930s. 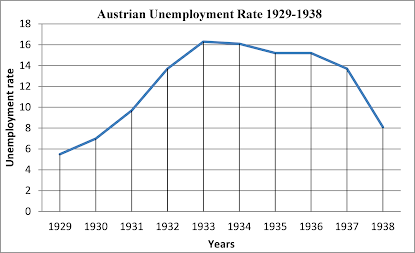 Unemployment was a disaster. And GNP growth was mostly feeble in the 1930s in the years after the actual contraction ended as we can see here:

It was essentially the economic policies that Mises would have approved of that did this to Austria.

It has been suggested by historians – and it seems plausible – that some considerable percentage of the population welcomed the Nazis in 1938 simply because they were sick of the economic problems caused by the Austro-fascist austerity, which Mises may well have designed as a policy adviser.

Modern Austrians simply gloss over this embarrassing part of history.