The Epistemic Types of Probability

There is a fundamental epistemic/epistemological division in types of probability, as we can see in the diagram below. 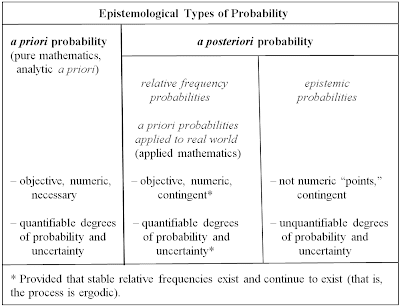 The major division is between

(1) a priori probabilities, and

All a priori probabilities can really be understood as analytic a priori: they are the product of a formal, abstract system in which it is simply assumed by definition that the system has a finite, exhaustive and exclusive number of outcomes which are all equiprobable.

That is, an a priori probability is necessarily true and a mathematical certainty because it is the product of an analytic a priori model that does not really describe reality, but simply assumes as part of its model the following factors:

(1) the abstract system is random, in the sense that, when an outcome occurs, it is from a set of possible known outcomes, and one such outcome is sure to occur. E.g., in an abstract tossing of a fair coin, we know that the result will be heads or tails and can denote the set of outcomes by {heads, tails}. The latter is the sample space.

(2) the abstract system has a sample space (or set of outcomes) that is known, in the sense that there are finitely many outcomes of the random process and these can be stated. (An event is defined as a subset of the sample space.)

(3) All events are equally likely to occur (or equiprobable).

Of course, a real world system might have these properties, but whether it does or not is a matter for empirical investigation.

In the calculation of an analytic a priori probability, we do not look at the real world, but simply assume an abstract model where all these conditions hold as true.

By such calculations, probability and uncertainty can be quantified with objective numeric “points.” In this case, the uncertainty is normally called “risk” or “Knightian risk,” after the work of Frank Knight.

This is ultimately pure mathematics and analytic a priori knowledge: the probabilities we create in this way have necessary truth, because they are abstract models.

As soon as you move to a real world game of chance, you cannot be absolutely sure that the game is fair, not rigged, and truly random, because we can only know this by a posteriori knowledge, which is fallible and does not yield certainty.

When we calculate the probability of winning at a real world game of roulette, we are taking an abstract model from pure mathematics and using it as an applied mathematical system: this means that the model is transformed from an analytic a priori system to a synthetic a posteriori system. We do not get epistemological certainty about the truth of the probabilities because any given real world system (such as the game of roulette) might not conform to the assumptions of the model (e.g., it might be rigged or the wheel might be biased).

Again, by such calculations, probability and uncertainty may well be quantified with objective numeric “points” – assuming the process really does have and continues to have stable relative frequencies. If the latter, the uncertainty could once again be interpreted as “risk” or “Knightian risk.”

But even this relative frequency approach is a posteriori and does not guarantee certainty. For no matter how many outcomes you look at, it is possible that the next outcome might have been biased in some way or rigged: so that the probabilities are fallible and contingent. Even in natural systems where we have some reason to think that nature produces the objective probabilities as a matter of ontological necessity, Hume’s problem of induction throws up epistemological problems that still prevent us from obtaining epistemological certainty.

Matters are even worse once we get to social and economic systems: for here stable relative frequencies may not even exist, or when they do, they exist only in the short run, as noted by Paul Davidson:

“[s]ome economic processes may appear to be ergodic, at least for short subperiods of calendar time, while others are not. The epistemological problem facing every economic decision maker is to determine whether (a) the phenomena involved are currently governed by probabilities that can be presumed ergodic – at least for the relevant future, or (b) nonergodic circumstances are involved.” (Davidson 1996: 501).

When we face epistemic probabilities derived from experience, empirical evidence and inductive arguments, and no objective “point” probabilities (either in an a priori or relative frequency sense) can be given, then the probability of a proposition also comes with some degree of uncertainty, from low to very high.

When one has no relevant or convincing evidence on which to make an inductive argument, one would face total or radical uncertainty. Exactly when and in what circumstances one does face radical uncertainty, of course, could be a matter of some dispute.

It is important to remember that, in the Post Keynesian tradition, the word “uncertainty” is usually understood to be non-quantifiable and restricted to that sense, whereas “risk” is quantifiable.