Debunking Marx’s Concept of Exploitation based on Surplus Labour Value

The working day under Marx’s theory in volume 1 of Capital can be conceptualised in the diagram below, where there is a total working day of 12 hours. 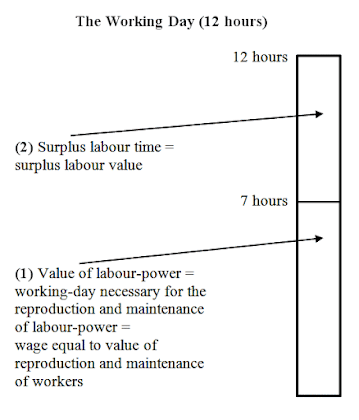 Although the total working day in any particular industry can be variable, there are two parts of the working day as follows:

(1) necessary labour-time, which is “determined by the working time required for the reproduction of the labour-power of the labourer himself” (Marx 1906: 256), and

Let us assume that the concept of abstract socially necessary labour time is coherent and empirically relevant for the sake of argument (even though the concept is incoherent, cannot be properly defined and is empirically irrelevant).

But note carefully: this theory only works if real world wages of labour tend to equal the value of reproduction and maintenance of workers, which is a type of subsistence wage.

However, wages even for workers have soared above subsistence levels, and clearly did so even in the 19th century, as noted here. Moreover, the total working day has fallen in the long run even as real wages have soared.

For example, in Germany the poverty line for a worker and spouse with two children is a monthly income of €1,873. However, it is clear that even this income provides a standard of living that is vastly better than the subsistence wage equal to the value of labour-power imagined by Marx, and moreover it can buy all sorts of goods that would have been considered luxuries in the 19th century as well as goods that did not even exist then. For example, it is absurd that, under Marx’s subsistence wage equal to the value of labour-power, a worker would require a television, DVDs, mobile phones, and the host of other modern articles of consumption now enjoyed even by workers, for none of these things are actually needed for working people merely to live and reproduce themselves.

If we able to aggregate all human labour with a homogeneous unit of Marx’s abstract socially necessary labour time, and then set an appropriate wage rate for one simple hour of labour, it would follow from the data that most wages in modern capitalism are well above Marx’s value of labour-power, and it would be very likely that many workers suffer very little exploitation or no exploitation at all in Marx’s sense because they are paid not only for necessary labour-time but also surplus labour-time or most of surplus labour time too – for if they were not their wages would have been stagnating for over 100 years at subsistence levels.

Marx’s whole theory of exploitation is dependent on the idea that workers must tend to be paid a subsistence wage equal to the value of reproduction and maintenance of labour, but once we see that wages in capitalism have soared above subsistence level this is shown to be false, and the whole theory comes crashing down.

Another point is that for a self-employed worker who owns, runs and works alone in his own business, Marxist exploitation cannot arise. Even worse, Marx distinguished between so-called “productive” and “unproductive” labour and seems to have argued that vast sections of what we would now call the service economy do not add surplus value (e.g., see Capital, volume 3, Chapter 17), even though they manifestly do produce profits and account for a huge percentage of employment in modern capitalism. How is a person in a service industry who produces no surplus value being exploited in Marx’s theory? Of course, Marx would argue that surplus value from value-producing industries is redistributed, but, again, that only works if labour tends to be paid just for its value of reproduction and maintenance (that is, a subsistence wage), which, as we have seen, is generally just not true.

A final point is that once Marx’s idea that commodities tend to exchange at true labour value is overthrown (as in volume 3 of Capital), it follows that many commodities can sell for prices well above their labour values and businesses can afford a wage to workers well above subsistence level and even covering their surplus labour time, a state of affairs which would not even involve exploitation by extraction of unpaid surplus labour value.