US Federal Government Spending as a Percentage of GDP

Below is a graph of US federal government spending as a percentage of GDP. The data is taken from Usgovernmentspending.com. 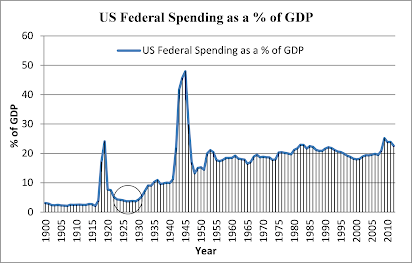 What is interesting here is how low the percentage was in the 1920s when the Great Depression struck in 1929.

Given that US GDP collapsed by 28.52% between 1929 to 1933, the rise in US spending under Hoover was feeble and far short of what was need to stabilise GDP and end the depression. In fact, Hoover actually ran a budget surplus in fiscal year 1930 (from July 1, 1929–June 30, 1930), not a deficit. Hoover also cut spending in fiscal year 1933, and introduced the Revenue Act of 1932 (June 6) which increased taxes across the board and applied to fiscal year 1932 and subsequent years. These were all contractionary fiscal policies, and the rise in government spending as covered by tax increases was not stimulative.

If we want to see the kind of government spending that creates relative macroeconomic stability, then we need to look after 1945.

The macroeconomic stability that emerged after 1945 in the US (and other nations) is a strong function of the much larger role government spending has in the economy, of the more effective use of fiscal policy, and, of course, central bank interventions.

As we can see, US federal government spending as a percentage of GDP has fluctuated around 20% since 1945. It has risen since 2008 because of the US stimulus and the unprecedented crisis not seen since the 1930s. But today government spending and financial sector stabilisation via central banks was enough to prevent a return to 1930s-style depression.