Robert P. Murphy in his recent response to Krugman on Mises and the Great Depression refers us to the following post to refute the idea that “sticky wages” really are a problem for free market economics:

This post deserves to be read by everyone who wants to see how far Austrian economists (and, incidentally, even mainstream New Keynesians like Mankiw) are from understanding real-world capitalism.

Keynes was clear that even if wages and prices were perfectly flexible this would still be no reliable and automatic cure for involuntary unemployment, and that there could still be failures of aggregate demand (Davidson 1992). Keynes, then, would not have been a New Keynesian like Mankiw.

But the issue here is wage stickiness.

First, Murphy does not even dispute that wage stickiness is a real phenomenon in modern market economies (what is now called a “stylised fact”), but instead wishes to put the blame for it mostly on modern governments.

I will return below to why this is wrong, but Murphy makes an astonishing claim that is utterly untrue:

“Now we have to ask, why do workers hold out for so long without jobs, insisting on wages that no one is willing to pay? After all, the other goods and services in the economy see their prices fall in a speedy fashion even though the sellers of these items depend on them for their livelihood. So if a street vendor knows enough to slash his hot dog prices when demand collapses, why don’t hairdressers accept pay cuts when the same happens to their industry?

What was that? Murphy is saying that real world “prices fall in a speedy fashion”?

Has Murphy ever noticed that in virtually all recessions since the late 1930s throughout the developed world, even recessions tend to be inflationary? Deflation has virtually disappeared.

Relative price rigidity is a fact of life. Even in the terrible disaster that was the Great Depression it was a clear phenomenon.

The reason has been known since the work of Gardiner Means: most prices in modern capitalist economies are relatively inflexible mark-up/administered prices (for the empirical evidence, see Appendix 2 below).

Flexible price setting as required in standard economics textbooks – where prices are set by supply and demand dynamics – is largely shunned by the private sector itself.

A great part of the economy of each modern capitalist nation consists of mark-up pricing sectors, but even though (of course) flexprice markets do exist they are a considerably smaller part of the economy than most people think (perhaps less than 30% in many nations).

And, even though many nations saw price deflation in the Great Depression, even in the 1930s mark-up prices were significant and relatively inflexible as compared with other markets: Gardiner Means, for example, discovered that the administered pricing sector of the US economy had seen price declines of only about 10% during the depression, whereas the more competitive or flexprice sectors had seen price falls of about 40 to 60% (Means 1975).

So even Robert Murphy’s initial assumption that we live in a world of highly flexible prices cannot be taken seriously, and utterly collapses.

The empirical evidence that has accumulated over the years shows that people in general object to having their nominal wages cut. But even managers and capitalists often dislike pay cuts. Recent studies suggest that employers avoid pay cuts because they diminish workers’ morale, and then falling morale reduces productivity, amongst many other reasons (Bewley 1999). The evidence of Bewley shows that even employers are often averse to wage cuts during recessions. A nice summary of Bewley’s work on wages is available here.

But moving on, even Murphy’s explanation of wage rigidity during the depression in the US is flawed:

“…why don’t hairdressers accept pay cuts when the same happens to their industry? In the case of the Great Depression, the answer is simple enough: the federal government didn’t allow wages to fall. After the 1929 crash, Herbert Hoover gathered the nation's leading businessmen for a conference in Washington and urged them to allow profits and dividends to take the hit, but to spare workers’ paychecks. Rather than cut wages, businesses were supposed to implement spread-the-work schemes where workers would cut back their hours.”

First, Hoover’s “high wage” policy was not an alien, evil government intervention imposed on unwilling and hostile business people: it was a policy that many largely agreed with, as I note here. Already in the 1920s and 1930s many employers had grown averse to wage cuts.

Secondly, Rose (2010) presents some (admittedly ambiguous) evidence that Hoover’s “high wage” policy actually did not have much effect on the timing of US wage cuts during the depression.

Of course, that rigid wages in the face of falling prices squeezed profits and induced business pessimism and bankruptcy is undoubtedly true, but the solution was not wage cuts.

Why? Keynes showed why in Chapter 19 of the General Theory (Keynes 1964 [1936]: 257–271), and one important reason is that, even when nominal wages fall, this induces debt deflationary effects (especially when levels of private debt are very high), just as Irving Fisher had argued (Fisher 1933; see also Dimand 1997 and Dimand 2011).

Above all, if price deflation is quite uneven across sectors and product markets (as in many countries during the depression), the burden of fixed nominal debt will soar, inducing difficulty in servicing debt to many debtors and actual bankruptcy to others.

A further means by which demand for final goods and services is contracted is that a greater transfer of wealth from debtors to creditors occurs and creditors often have a lower marginal propensity to consume.

And eventually severe debt deflation will cause distress and bankruptcy to creditors and the financial system. So the smooth and rapid market clearing as postulated by Austrians and other mainstream neoclassicals as the cure for high involuntary unemployment simply could not and did not happen.

Murphy cites the recession of 1920–1921 as an example of how (alleged) wage and price flexibility cleared markets and led to a (supposedly) quick recovery. But the recession of 1920–1921 is highly anomalous, as I have shown elsewhere (see Appendix 1 below), and a demand-side explanation is more convincing as an explanation of recovery in 1921. There was no financial crisis, no banking failures, the deflation was probably expected, some actual positive supply shocks, and private debt levels were considerably lower than in 1929.

Murphy is also wrong that the Federal Reserve “jacked rates up to record high levels,” if he is talking about the recovery in 1921:

As we can see, the Fed lowered interest rates from May 1921, and a recovery began in August 1921, after looser monetary policy had been adopted.

Then from November 1921 to June 1922, the Fed engaged in unprecedented open market operations to aid the recovery process.

The Austrian obsession with the recession of 1920–1921 is strange, given its anomalous nature. Why don’t they look at the US recessions of the 1870s and 1890s, for example?

The US had no central bank in these years, small government, a gold standard, either no or very limited unemployment relief at best, and (presumably) a greater degree of price and wage flexibility (although even in this period wage stickiness existed: see Sundstrom 1990; Sundstrom 1992; Hanes 1992; Hanes 1993). Yet serious economic problems occurred in both the 1870s and 1890s.

Take the 1890s. The graph below shows US unemployment in the 1890s according to three estimates. For various reasons, Lebergott’s estimates may be the better ones for unemployment rates in this period. 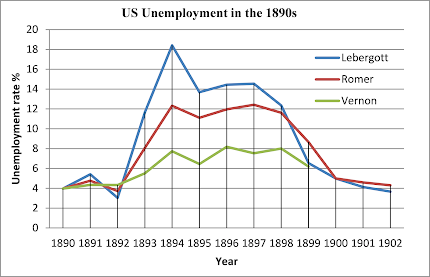 High unemployment continued for years after the shock of 1892–1893.

So what is the Austrian explanation for this? If wages and prices were not sticky, then there was still no rapid recovery and quickly self-adjusting labour market.

If wages were sticky, then not even late Gold Standard capitalism escaped the “stylised fact” of relatively rigid wages.

Either way the Austrian view is damned.

“Administered Prices in the Eurozone: Some Empirical Data,” October 16, 2013.

Dimand, Robert W. 2011. “Lessons from the 1929 Crash and the 1930s Debt Deflation: What Bernanke and King Learned, and what they could have learned,” in Claude Gnos and Louis-Philippe Rochon (eds.), Credit, Money and Macroeconomic Policy: A Post-Keynesian Approach. Edward Elgar, Cheltenham. 33–44.