Why Did WWII Lift America Out of Depression?

Although I would add some caveats and a few more significant reasons, none other than the libertarian Robert Higgs (more or less) hits the nail on the head:

“Notwithstanding the initial availability of much unemployed labor and capital, the mobilization became a classic case of guns displacing both butter and churns. So why, apart from historians and economists misled by inappropriate and inaccurate statistical constructs, did people—evidently almost everyone—think that prosperity had returned during the war?

The question has several answers. First, everybody with a desire to work was working. After more than 10 years of persistently high unemployment and the associated insecurities (even for those who were working), full employment relieved a lot of anxieties. Although economic well-being deteriorated after 1941, civilians were probably better off on the average during the war than they had been during the 1930s. Second, the national solidarity of the war effort, though decaying after the initial upsurge of December 7, 1941, helped to sustain the spirits of many who otherwise would have been angry about the shortages and other inconveniences. For some people the wartime experience was exhilarating even though, like many adventures, it entailed hardships. Third, some individuals (for instance, many of the black migrants form the rural South who found employment in northern and western industry) were better off, although the average person was not. Wartime reduction of the variance in personal income—and hence in personal consumption—along with rationing and price controls, meant that many people at the bottom of the consumption distribution could improve their absolute position despite a reduction of the mean. Fourth, even if people could not buy many of the things they wanted at the time, they were earning unprecedented amounts of money. Perhaps money illusion, fostered by price controls, made the earnings look bigger than they really were. In any event, people were building up bank accounts and bond holdings; while actually living worse than before, they were feeling wealthier. Which brings us to what may be the most important factor of all: the performance of the war economy, despite its command-and-control character, broke the back of the pessimistic expectations almost everybody had come to hold during the seemingly endless Depression. In the long decade of the 1930s, especially its latter half, many people had come to believe that the economic machine was irreparably broken. The frenetic activity of war production—never mind that it was just a lot of guns and ammunition—dispelled the hopelessness. People began to think: if we can produce all these planes, ships, and bombs, we can also turn out prodigious quantities of cars and refrigerators.”
Robert Higgs. 1992. “Wartime Prosperity? A Reassessment of the U.S. Economy in the 1940s,” Independent Institute, March 1
http://www.independent.org/newsroom/article.asp?id=138

First, the command economy put an end to unemployment, and not only that but many discouraged workers (or the “hidden unemployed”) were brought back into the labour force. We can see the reduction in unemployment in the graph below (in which the estimates are those of Darby (1976: 8), whose better method for calculating the figures is explained here). 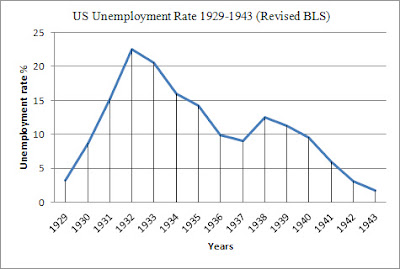 The sheer absurdity of asserting that “no economic good” of any kind came out of the war is refuted by this point alone. Many people no longer had to experience the grinding poverty of unemployment, and obtained work on the home front when the war started. And they obviously chose that work over being unemployed.

For anyone who subscribes to a subjective theory of value, it is obvious that many individuals must have obtained subjective value (or an “economic good”) from the newly created civilian employment they received during the war, even if nobody would seriously doubt that the hours in many of these jobs were long and the work difficult.

Secondly, the war allowed the accumulation of savings and money income. The point overlooked by Higgs is that this also allowed both business and consumers to finally complete the process of deleveraging and paying down private debt to a low level. That is a fundamental point: the debt deflationary drag on the US economy was eliminated during the war, as we can see in this graph (in the “private debt” line). 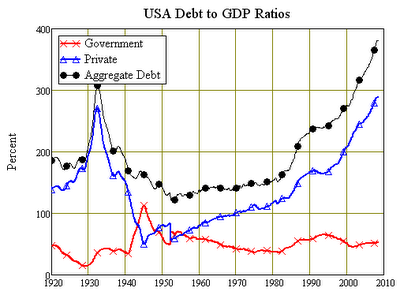 Thirdly, the war fundamentally shifted business expectations from being highly pessimistic to a strong optimism that emerged after the conflict ended.

With the end of the war, when expectations had become optimistic, there was a private investment and consumption boom, which was in part fuelled by the drawing down of savings earned in the war. That outcome is a Keynesian story.