Sumner versus Schiff and ShadowStats

The Sumner versus Schiff spat is going the rounds, and can be seen in the video below.


Scott B. Sumner is a market monetarist who blogs at Money Illusion.com, and advocates nominal GDP targeting, the latest neoclassical fad. Peter Schiff spins a vulgarised version of Austrian economics.

Of course, Scott Sumner makes a number of good points. To defend his position, Schiff falls back on the verbal legerdemain of using the virtually archaic definition of “inflation” as an increase in the money supply. When Schiff changes the accepted meaning of “inflation” used in the comments of his opponents, he is simply committing a fallacy of equivocation.

Secondly, Schiff’s claim that price inflation is actually much higher than the official figures, and that therefore real GDP has been negative since 2008 appears to be based on the alternative inflation figures at ShadowStats and their alternative real GDP estimates.

While one has to admit that the US recovery has been weak and that the level of private investment is insufficient, there are nevertheless serious reasons to doubt the ShadowStats figures, and a nice discussion here shows why:

While I have used ShadowStats myself in the past because it provides a useful graph of U6 (a better measure of US unemployment), the method used for calculating their alternative inflation measure appears questionable.

Furthermore, the Billion Prices Project at MIT data confirms that the official CPI estimates are a reasonable measure of inflation since 2008, as we can see below in the graph (in the red line). 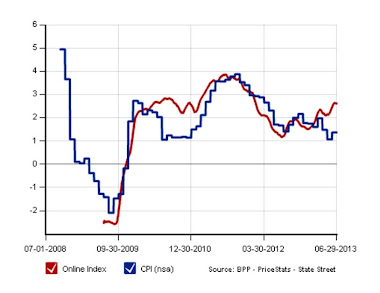 Unrelated Note
I’m also writing on my philosophy blog again, which can be found here:

To Live is to Think: Thoughts on Philosophy, Culture and Politics.

My latest post over there concerns Edward Feser’s review of Ray Kurzweil’s book How to Create a Mind: The Secret of Human Thought Revealed (New York, 2012).