Some Good Articles on Trump

Michael Lind, “The Neocons Are Responsible for Trumpism,” The National Interest, March 7, 2016.

I was particularly struck by Dreher’s article here, which describes the real and terrible experience of white working class Americans, the catastrophe of neoliberalism, and the vicious, elitist snobbery and hatred of the working class.

In fact, the title of this article says it all: 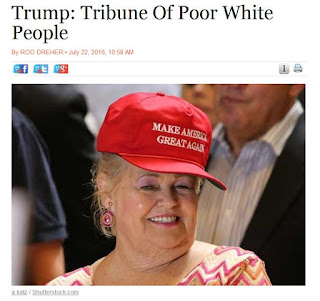 Yes, this is probably how a lot of poor white voters in America destroyed by neoliberalism and demonised by cultural leftism see Trump, even though Trump would have much less to offer them than a decent social democrat capable of making a clean break with the worst aspects of cultural leftist nonsense.

Labels: Some Good Articles on Trump