In Friedrich Engels’s Herr Eugen Dühring’s Revolution in Science (1894; first published in 1878), he argued that industrial capitalism, partly by means of automation and use of machines, drove workers’ wages down to a subsistence level and tended to keep them there:

This is quite a claim. Capitalism reduces workers’ wages and consumption to a “famine minimum.”

Our actual data on real wages from the late 19th century shows us this was false even then. It’s another Marxist theological dogma.

To show why this is so, let us turn to some good empirical data. Wood (1909: 102–103, Appendix) gives data on UK real wages from 1850 to 1902, constructed from the wage data for working people in a whole range of industries, which can be seen in the graph below. 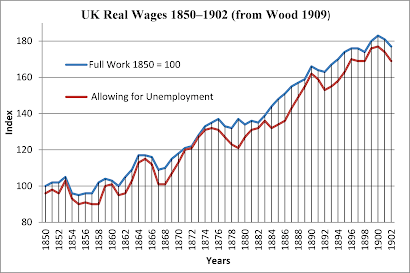 Perhaps Engels generalised from his limited experience and observations in the 1840s or 1850s, but in any case he was still wrong.