The graph below shows the top US federal marginal tax rates on (1) earned income (in red) and (2) (where it diverges from the latter) ordinary income (in blue), from the the data here. 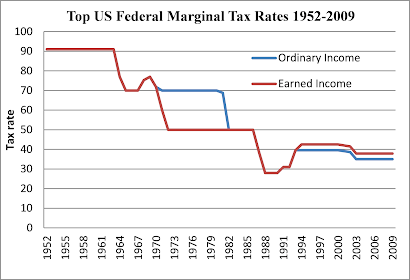 This is a large part of the story of rising US income inequality.

The major changes to the rates were as follows:

(4) subsequent changes have been minor, and the rate has fluctuated in a range from 30 to 40%.