An interesting graph of the top decile income share in the United States from 1910–2010 from Piketty’s data here. 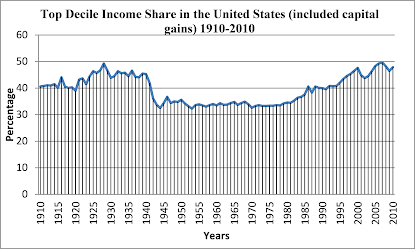 As we see, since 1981 the top 10%’s wealth has soared back to the level it was at in the 1920s, and a major cause, though not the only one, was Reagan’s changes to the tax system which made that system substantially less progressive.

The process is illustrated by changes to the top marginal tax rate.

Libertarians are fond of railing against so-called “soak-the-rich” tax systems, and yet from the 1940s to 1981 the US had a tax system with large progressive taxes on high individual income.

But those high taxes rates were consistent with very strong economic growth in that era: in fact, if we ignore the World Wars, the best decadal per capita GNP growth the US ever had, in the period from 1871 to 2001, was in the decade from 1961 to 1970.

Then under Reagan’s presidency the top marginal tax rate was reduced to 50% in the Economic Recovery Tax Act of 1981 and to 30% (in 1988). Further adjustments were but minor and only changed this rate in a range from 30 to 40%, as can be seen in the data here.

I have largely steered clear of the whole debate on Thomas Piketty’s Capital in the Twenty-First Century, but it seems to me James Galbraith, amongst others, has provided a good heterodox Keynesian perspective on it:

Philip Pilkington, “Piketty’s Regressive Views on Public Debt and the Potential Impact of his Book,” Fixing the Economists, April 30, 2014.

Philip Pilkington, “Why Thomas Piketty is Wrong About Inflation and Interest Rates,” Fixing the Economists, May 16, 2014.