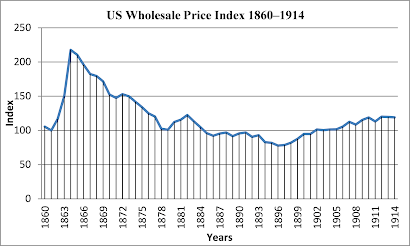 The graph shows the inflation during the American civil war and the subsequent post-bellum deflation.

But it is also widely accepted that there was an anomalous period of deflation, not just in America, but throughout the world from 1873 to 1896 (Capie and Wood 1997; Saul 1985).

This is also reflected in the data, though it was clearly not continuous: there were brief inflationary periods within the 1873 to 1896 period, even though there was a persistent long-term deflationary tendency. Many business people at the time seem to have vehemently complained about the “deflation of profits” and “of prices.” There is considerable evidence (here, here, here) that in the UK business expectations were shocked and that investment levels declined. Similar problems seem also to have happened in America, where this was the heyday of the free silver and bimetallist political movements that opposed the gold standard.

The political and economic problems seem to have ended after 1896: for then the world experienced an inflationary period from 1896 until 1914.