Proto-Keynesians in the Last Years of Weimar Republic Germany

It is well known that the Great Depression hit Weimar Republic Germany particularly hard. There was severe unemployment, and the wage and price deflation was also severe, as can be seen in these graphs (with data from Mitchell 1992): 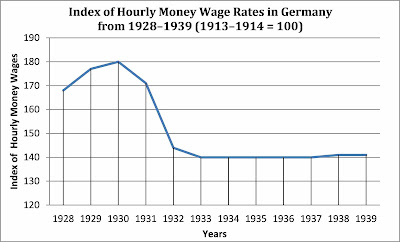 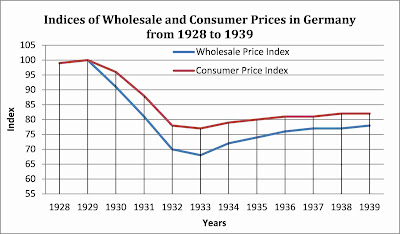 Moreover, the wage and price deflation did not bring about a rapid or effective recovery. Austerity policies clearly failed in the Weimar Republic, and a number of German businessmen, bureaucrats, journalists, and unorthodox economists were driven to advocate the only real policy solution that had not been tried: namely, unemployment relief and stimulus of the economy by large-scale deficit spending and public works programs.

Proto-Keynesian ideas were already being advocated in Germany before 1933 by the following people:

(1) Wilhelm Grotkopp (a business journalist) and Heinrich Drädger (a businessman) through the organisation they created in November 1931 called the Studiengesellschaft fur Geldund Kreditwirtschaft (Society for the Study of Money and Credit).
Both Grotkopp and Drädger held PhDs in economics, and advocated countercyclical fiscal policy in various meetings of their society in 1931 and 1932 and in writings for the public (Garvy 1975: 398).

(2) Wladimir S. Woytinsky (a statistician of the German Trade Union Federation).
Wladimir S. Woytinsky had been a Russian Bolshevik and then Menshevik who had fled to Germany in 1922. In 1931, Woytinsky published a paper in a German trade union journal supporting a credit-financed public works program for Germany (Garvy 1975: 399). This paper was called “Aktive Weltwirtschaftspolitik” (Arbeit 6 [June] 1931). In 1931 and 1932 Woytinsky continued a public campaign thorough the media to support his proposals, and he enlisted the support of Fritz Tarnow (who had already endorsed expansionary spending in a book) and Fritz Baade (head of a government agency for agricultural marketing). The plan was dubbed the “WTB Plan” (from the initials of Woytinsky, Tarnow and Baade).

(3) Ernst Wagemann (the head of both the Reich’s Statistical Office and the Institute of Business Cycle Research).
In 1932, Ernst Wagemann advocated a plan for reducing unemployment by deficit-financed public works programs in a book called Geld- und Kredit Reform (Berlin, 1932).

(4) Wilhelm Lautenbach (an official in the Ministry of Economics).
Wilhelm Lautenbach had in September 1931 advised the Weimar government to use bank credit for public works programs to relieve unemployment in a memorandum called “Moglichkeiten einer Konjunkturbelebung durch Investition und Kreditausweitung” (Opportunities for Economic Recovery through Investment and Credit Expansion).

These proposals to use fiscal stimulus and public works received varying degrees of support from other intellectuals in Germany such as Adolph Lowe, Emil Lederer, Werner Sombart, F. Baade, and G. Colm (Garvy 1975: 398).

Woytinsky had even corresponded with Keynes in December 1931, and requested that Keynes participate in an international trade union committee which Woytinsky thought would endorse his ideas (though the Board of the International Labour Federation failed to endorse or examine Woytinsky’s plan: see Garvy 1975: 400).

One can only marvel at how stunningly worthless the German Social Democrats were during the last years of the Weimar Republic in Germany, in that they shunned the only real economic policy that could have rapidly ended the Great Depression. A similar state of affairs occurred in Britain, where the British Labour party endorsed Neoclassical austerity and also shunned Keynesian policies to end the Great Depression in Britain.

In a meeting between Wladimir S. Woytinsky and the German Social Democrats in August 1932 in which Woytinsky’s plans for public works programs were discussed, the monumentally stupid Marxist Rudolf Hilferding rejected Woytinsky’s ideas to end unemployment by public works, because, he maintained, this was not a Marxist policy (Berman 2006: 114).

Wladimir S. Woytinsky later wrote an account of the meeting in his autobiography:

“The [sc. WTB] Plan gained more and more popularity in the nation [sc. in 1932], but the S-D party remained adamant and refused to use the slogan of public works in the Reichstag election campaign in July, 1932. It preferred to stick to Brüning’s guns — defense of the currency. The results of the election were catastrophic for the Republic. The Nazis gained more than one third of all the votes and 230 seats out of the Reichstag’s 568. The new Reichstag had a clear anti-republican majority of Nazis and Communists and was unable to form a republican government. All parties began to brace themselves for a new appeal to the voters.

Leipart called me to his office. ‘The party,’ he told me, ‘has agreed to meet with us to discuss the plan of public works. There will be forty party representatives and as many from the labor unions. Will you prepare our case for the conference?’

I asked Gerhard Colm, a scholar of national reputation, not connected with the labor movement, to be our reporter. The party named [sc. Rudolf] Hilferding as its spokesman. I was slated to open the panel discussion with a rebuttal of Hilferding’s arguments.

The conference was held in a large room in the Reichstag building. Everyone sat around a horseshoe-shaped table covered with green cloth. Wells occupied the chair, with the union people at his right and the Reichstag members at his left. Red in the face, he opened the discussion grimly. ‘It is time to end this silly dispute. Inflation-deflation, public works ... I do not know what. . . . This non-sense must be stopped.’

Colm spoke in an academic way, developing a theory that since has become commonplace. The price level and volume of economic activities can be regulated by monetary and credit measures. Public works is the best, and politically the most expedient, approach to the problem.

Hilferding was the next speaker. ‘Colm and Woytinsky,’ he said, ‘are questioning the very foundations of our program, Marx’s theory of labor value. Our program rests on the conviction that labor, and labor alone, creates value. Prices deviate from labor values under the impact of the interplay of supply and demand. Depressions result from the anarchy of the capitalist system. Either they come to an end or they must lead to the collapse of this system. If Colm and Woytinsky think they can mitigate a depression by public works, they are merely showing that they are not Marxists.’

My first thought was that Hilferding could not have taken that nonsense seriously. Obviously, he had a limitless contempt for his listeners and did not condescend to argue before them but appealed to the cliches in their brains. A score of deputies listened to him as to an oracle. Wells sat motionless in his armchair, his eyes closed and his head sunk on his breast. Hilferding ended with an appeal to the party to rise united to the defense of a sound currency and Marxism.

I began my rebuttal. ‘The flood of unemployment is rising, the people are at the end of their patience. The workers, holding us responsible for their misery, are deserting the party to join the Communists and Nazis. We are losing ground. There is no time to waste. Something must be done before it is too late. Our plan has nothing to do with any particular value theory. Any party can execute it. And it will be executed. The only question is whether we take the initiative or leave it to our enemies. It is not true — ’

I felt that I was gaining the audience, but suddenly a deafening noise came from the head of the table. Wells was pounding the desk with both fists and shouting, ‘Shut up! I will not permit — ’

‘You will not permit what?’ I asked in consternation.

‘You said it is not true.’ If what Hilferding said is not true he must be a liar! I will not permit — ’

Hell broke out, a dozen people shouting. Wells fell back into his chair, with closed eyes and his head sunk on his breast, sound asleep. Leipart asked me to continue, but the effect of my speech was completely lost. I elaborated the technical and financial aspects of the Plan. Nobody listened — for the union people this was old stuff and the Reichstag deputies did not care. After a few remarks from both sides, Leipart put the ADGB plan to a vote. All the representatives of the unions raised their hands in favor of it, all the representatives of the party except Baade voted ‘nay.’

So, at this meeting, the Social Democratic party doomed itself to continuing electoral disaster, and revealed itself to be in the grip of deranged Marxists, who, urged on by Hilferding, were united in the defence of “sound currency [!] and Marxism.”

In contrast, the left-wing of the Nazi Party led by Gregor Strasser supported a large-scale public works program called the “emergency program” in May 1932, when Strasser had given his famous “Work and Bread” speech in the Reichstag. Here we must remember that the actual name of the Nazi party was the “National Socialist German Workers’ Party” (Nationalsozialistische Deutsche Arbeiterpartei or NSDAP), and it did have a real anti-capitalist wing around Gregor Strasser called the Strasserites, who were purged in the Night of the Long Knives (29 June 1934).

The endorsement by Gregor Strasser of a proto-Keynesian policy to end unemployment in Germany in May 1932 was surely one factor in the electoral success of the Nazi party in July 1932, when the party won 37.3% of the vote in the Reichstag elections.

Of course, it is well known that when Hitler became chancellor of Germany in 1933, he began to enact large-scale deficit spending which financed public works programs, civilian spending and rearmament.

Years later, the Post Keynesian economist Joan Robinson – in an article in 1972 – pointed out the following:

“I do not regard the Keynesian revolution as a great intellectual triumph. On the contrary, it was a tragedy because it came so late. Hitler had already found how to cure unemployment before Keynes had finished explaining why it occurred.” (Robinson 1972: 8).

However, Joan Robinson was not quite right here, because the inspiration for these policies, as we have seen, did not originally come from the Nazis, but from German businessmen, bureaucrats, journalists, unorthodox economists and from Wladimir S. Woytinsky, who had been, before coming to Germany, a literal Russian Bolshevik and Menshevik in the Soviet Union.

The Nazi deficits from 1933 were hidden and kept secret by means of special bills called Öffa bills and MEFO bills which were redeemable at the Reichsbank for reserves by German banks. The most important of these bills was the MEFO bill, issued by a dummy company called the Metallurgische Forschungsgesellschaft, m.b.H. (MEFO). For an extended discussion of MEFO bills and Hjalmar Schacht’s ingenious controls on foreign exchange and trade, see here.

The real lesson here is that the sheer catastrophe of the Great Depression in Germany forced original thinkers to the only solution left that could actually work: large-scale deficit spending and public works programs.

As I outlined in a previous post on pre-1938 fascist Austria here, history ran a most fascinating experiment for us from 1933 to 1939: in Austria, the clerical fascists pursued austerity with wage and price deflation from 1934 to 1937, partly under advice from Ludwig von Mises, while in Germany from 1933 the National Socialist government of Hitler implemented deficit-financed stimulus and public works programs and other highly effective economic interventions (such as restrictions on imports and rationing of foreign exchange to overcome balance of payments problems). Germany rapidly recovered from the Great Depression. 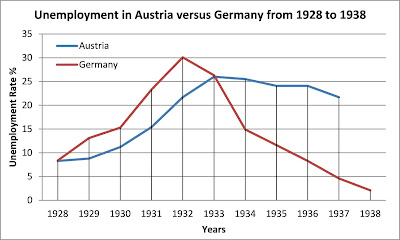