In this recent stream on economics, Academic Agent attempts to defend Rothbard’s views on the American economy in the 1870s.

In my Twitter debates on this issue with Academic Agent – who is an unusually ignorant libertarian – I directed him to my post here.

I said explicitly in that post that, while Rothbard was correct that there was no depression in the sense of a fall of GDP/GNP of 10% or more, Rothbard was nevertheless wrong to claim that the 1873–1878 period saw “extraordinarily large expansion of industry.”

Here is what Rothbard said:

“Orthodox economic historians have long complained about the ‘great depression’ that is supposed to have struck the United States in the panic of 1873 and lasted for an unprecedented six years, until 1879. Much of the stagnation is supposed to have been caused by a monetary contraction leading to the resumption of specie payments in 1879. Yet what sort of ‘depression’ is it which saw an extraordinarily large expansion of industry, of railroads, of physical output, of net national product, or real per capita income? As Friedman and Schwartz admit, the decade from 1869 to 1879 saw a 3-percent per-annum increase in money national product, an outstanding real national product growth of 6.8 percent per year in this period, and a phenomenal rise of 4.5 percent per year in real product per capita. Even the alleged ‘monetary contraction’ never took place, the money supply increasing by 2.7 percent per year in this period. From 1873 through 1878, before another spurt of monetary expansion, the total supply of bank money rose from $1.964 billion to $2.221 billion—a rise of 13.1 percent or 2.6 percent per year. In short, a modest but definite rise, and scarcely a contraction.

It should be clear, then, that the ‘great depression’ of the 1870s is merely a myth—a myth brought about by misinterpretation of the fact that prices in general fell sharply during the entire period. Indeed they fell from the end of the Civil War until 1879. Friedman and Schwartz estimated that prices in general fell from 1869 to 1879 by 3.8 percent per annum. Unfortunately, most historians and economists are conditioned to believe that steadily and sharply falling prices must result in depression: hence their amazement at the obvious prosperity and economic growth during this era. For they have overlooked the fact that in the natural course of events, when government and the banking system do not increase the money supply very rapidly, free-market capitalism will result in an increase of production and economic growth so great as to swamp the increase of money supply. Prices will fall, and the consequences will be not depression or stagnation, but prosperity (since costs are falling, too) economic growth, and the spread of the increased living standard to all the consumers.” (Rothbard 2002: 154–155).

The central claims of Rothbard about the 1870s are therefore as follows:

(2) in the period between the panic of 1873 and 1879, there was an “extraordinarily large expansion of industry”.

While assertion (1) is true on the basis of the most recent GNP/GDP estimates, assertion 2 is false.

To see this we need only look at the best indices of industrial/manufacturing output in these years.

First, a graph of Frickey’s manufacturing index (Frickey 1947; for a high quality version of the graph, click on it or open it in a new window): 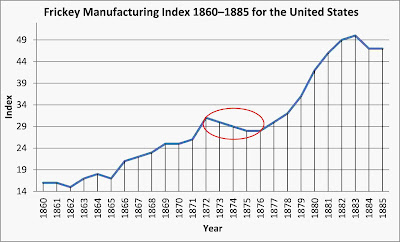 The data from Frickey shows an industrial recession from 1873–1876 in which there was a 9.67% fall in manufacturing output (almost a depression in the manufacturing sector).

Next, a graph of the data from Davis’s US industrial index (Davis 2004: 1189), which uses 43 annual components of the manufacturing and mining industries in the US, which represented about 90% of manufacturing output in the 1800s (Davis 2006: 105; for a high quality version of the graph, click on it or open it in a new window): 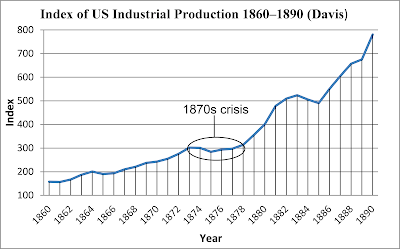 We can see the data here in table form from Davis’s US industrial index:

So the data is clear: there was a real industrial recession and stagnation until 1877. Both industrial indices, whether the older data of Frickey (1947) or newer, better index of Davis, show serious problems in the manufacturing sector.

But given our data from Frickey and Davis that shows a manufacturing recession, the data of Balke and Gordon – if accurate – can only mean that it was agriculture and services that continued to grow in order to provide positive real GNP in 1873 and in 1875–1877.

But this is the precise opposite of what Rothbard said: Rothbard wanted us to believe that there was an “extraordinarily large expansion of industry” from 1873 to 1877. That is clearly false.

There is also considerable contemporary evidence from the 1870s of serious unemployment in the manufacturing sector as catalogued by Bernstein (1956).

A report of the Bureau of Statistics in Pennsylvania in 1875 reported the following:

“… in October, 1873, occurred the revulsion in trade (known as the panic) which immediately checked industrial operations, and which, although it was generally supposed its effects would be temporary, has continued to grow in force and intensity ever since.

This has materially obstructed the operations of the Bureau in its attempts to procure returns that could be used for tabular statements, in fact making it impossible. Those who have not given particular attention to this phase of the subject, would be astonished in making anything like an extended inquiry among our industrial establishments this year, to find in how large a proportion of them, there was so little being done that detailed reports would be impracticable.

Very many are entirely closed, having given up the attempt to keep their machinery moving at all. Many more just doing sufficient to have the appearance of running, while those doing what could be called sufficient business to cover expenses, were so very small a proportion of the whole as to constitute them exceedingly rare exceptions to the general rule. Probably never in the history of the country has there been a time, when so many of the working classes skilled and unskilled, have been moving from place to place seeking employment that was not to be had—never, certainly for so long a time.” (Commonwealth of Pennsylvania 1875: 433).

The unemployment data in Vernon (1994) shows rising unemployment from 1873 to 1878 (for a high quality version of the graph, click on it or open it in a new window): 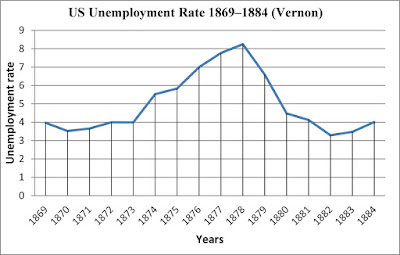 This would strongly confirm problems in the US economy in these years. Another point is that, on the basis of analysis of the 1890s and the likelihood that 19th century labour force participation rates were countercyclical in the sense of rising during recessions, there is at least a reasonable case that Vernon’s data seriously underestimates US unemployment in the 19th century, so that the real unemployment rate for the 1870s may have been considerably higher. 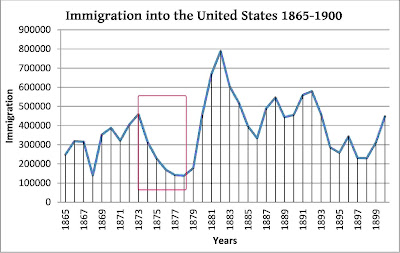 As we can see, immigration fell in every year from 1873 to 1878, which suggests a bad economy which discouraged immigration. The falling periods of US immigration in the late 19th century generally line up with recessions.

So, all in all, our data shows that the United States from 1873 to 1877 had a recession within the manufacturing sector, even if GDP (with the exception of 1874) continued to grow owing to agriculture and services.

Unemployment seems to have risen in every year down to 1878 (consistent with contemporary evidence reporting bad industrial unemployment), and there cannot have been a healthy economy in these years if manufacturing – the most important sector – was internally in recession. Rothbard was wrong to think there was an “extraordinarily large expansion of industry” between 1873 and 1879, and that there was some economy-wide boom in these years.

Commonwealth of Pennsylvania. 1875. Second Annual Report of the Bureau of Statistics of Pennsylvania, for the Years 1873–1874. B. F. Meyers, Harrisburg.

Rothbard, Murray N. 2002. A History of Money and Banking in the United States. Ludwig von Mises Institute, Auburn, Ala.