The 1870s Economic Crisis in America: Reality versus Rothbard

It doesn’t matter how many times Rothbard’s view of the 1870s is refuted, Austrians and libertarians simply continue to shun reality and repeat Rothbard’s errors (such as here and here).

It can’t hurt to review the data.

The data from Davis shows that US industrial production contacted from 1873 to 1875, then had a modest recovery in 1876, but then stagnated in 1877:

Even in 1877 US industrial production remained below its 1873 peak. On the basis of this data, Davis argued that there was a recession in the US probably from 1873 to 1875. Strangely, the real GDP estimates in Balke and Gordon (1989) only show a recession in 1874 in this decade, but Davis’s data clearly are a much better guide to what was happening in the US industrial sector then Balke and Gordon’s work, and we should go with Davis.

The data on US industrial production are best seen in the graphs below. 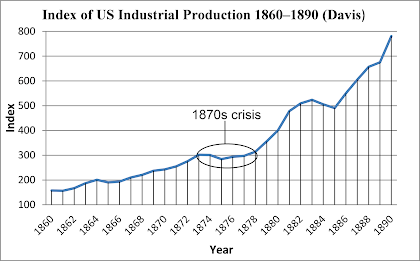 As we can see in the graph above, the recession and stagnation in industrial production from 1873 to 1877 are clearly visible as compared with the ten years of growth both before and after this period. 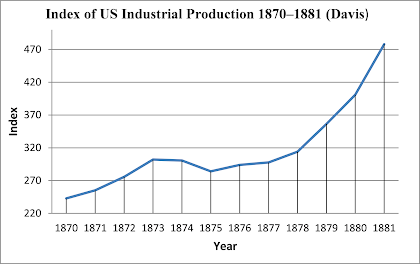 We can also see that the serious take-off in the recovery of industrial production only happened from 1878.

It is evident, then, that something went badly wrong with US industrial production from 1873 to 1877, and this is confirmed by the unemployment estimates from this period from Vernon (1994). 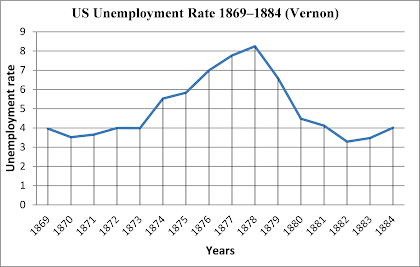 As we see here, unemployment was rising from 1873 and kept on rising until 1878. That would strongly confirm that the US economy was in recession in these years or at the very least was stagnating (another point is that, on the basis of analysis of the 1890s and the likelihood that 19th century labour force participation rates were countercyclical in the sense of rising during recessions, there is at least a reasonable case that Vernon’s data seriously underestimates US unemployment in the 19th century, so that the real unemployment rate for the 1870s may have been considerably higher).

All in all, then, it is not possible to claim that the US economy was booming in these years.

Now compare the facts above with the ignorance of Murray Rothbard:

“Orthodox economic historians have long complained about the ‘great depression’ that is supposed to have struck the United States in the panic of 1873 and lasted for an unprecedented six years, until 1879. Much of the stagnation is supposed to have been caused by a monetary contraction leading to the resumption of specie payments in 1879. Yet what sort of ‘depression’ is it which saw an extraordinarily large expansion of industry, of railroads, of physical output, of net national product, or real per capita income? As Friedman and Schwartz admit, the decade from 1869 to 1879 saw a 3-percent per-annum increase in money national product, an outstanding real national product growth of 6.8 percent per year in this period, and a phenomenal rise of 4.5 percent per year in real product per capita. Even the alleged ‘monetary contraction’ never took place, the money supply increasing by 2.7 percent per year in this period. From 1873 through 1878, before another spurt of monetary expansion, the total supply of bank money rose from $1.964 billion to $2.221 billion—a rise of 13.1 percent or 2.6 percent per year. In short, a modest but definite rise, and scarcely a contraction.

It should be clear, then, that the ‘great depression’ of the 1870s is merely a myth—a myth brought about by misinterpretation of the fact that prices in general fell sharply during the entire period. Indeed they fell from the end of the Civil War until 1879. Friedman and Schwartz estimated that prices in general fell from 1869 to 1879 by 3.8 percent per annum. Unfortunately, most historians and economists are conditioned to believe that steadily and sharply falling prices must result in depression: hence their amazement at the obvious prosperity and economic growth during this era. For they have overlooked the fact that in the natural course of events, when government and the banking system do not increase the money supply very rapidly, free-market capitalism will result in an increase of production and economic growth so great as to swamp the increase of money supply. Prices will fall, and the consequences will be not depression or stagnation, but prosperity (since costs are falling, too) economic growth, and the spread of the increased living standard to all the consumers.” (Rothbard 2002: 154–155).

Rothbard makes the following claim about our relevant period:

“Yet what sort of ‘depression’ is it which saw an extraordinarily large expansion of industry, of railroads, of physical output, of net national product, or real per capita income.” (Rothbard 2002: 154–155).

Of course, if one wants to define “depression” as a fall in real GDP of 10% or more (a definition which I accept), then it is likely that the 1873 to 1879 period was not an era of depression. Rather, it was most likely a period of serious recession (where “recession” means a fall in real GDP of less than 10%) and then stagnation of industrial production and rising unemployment, and probably pessimistic business expectations leading to deficient investment.

Moreover, Rothbard is wrong on the following points:

(2) if industrial production was in crisis, then it is very difficult to see how there could have been a “large expansion” of “physical output” or “net national product” in these years, despite the real GDP estimates of Balke and Gordon (1989: 84): they estimate that average real GDP growth from 1873 to 1877 was 2.8% (which in any case is far lower than Rothbard’s estimate). If real GDP was experiencing such growth rates, one must ask: which sectors were growing? Clearly the industrial sector was not.

(3) there was no “extraordinarily large expansion of … real per capita income” in the relevant period. Even if one accepts the estimates of Balke and Gordon (in Maddison 2006: 87–89) the average real per capita GDP growth rate from 1873–1879 and even from 1871–1880 was just 1.64%: one of the lowest growth rates of all time in relevant periods of economic and historical significance in US history.

(4) finally Rothbard never considered unemployment, which by one influential modern estimate by Vernon (1994) began rising from 1873 and kept on rising until 1878.

Our inescapable conclusion is that the Austrian claim – derived from Rothbard – that the 1870s were an uninterrupted era of “prosperity …[,] economic growth, and the spread of the increased living standards” is an outright historical travesty.

And while Rothbard might claim that he did the best with the data he had at the time (e.g., older and now discredited data from Friedman and Schwartz 1963), that is no excuse for modern Austrians repeating his false and flawed analysis today.

Rothbard, Murray N. 2002. A History of Money and Banking in the United States. Ludwig von Mises Institute, Auburn, Ala.