Zack Beauchamp on Why the Modern Left is Collapsing

Zack Beauchamp, “No Easy Answers: Why Left-Wing Economics is not the Answer to Right-wing Populism,” Vox.com, 13 March, 2017.

This is surprisingly astute, even if certain parts are unpleasant.

The issues that drive modern politics now are endless Third World mass immigration, open borders, and all the insanity spawned by the Cultural Left.

As I said here, it isn’t enough for the modern Left to simply support left heterodox economics while they continue to support Cultural Leftism and open borders, because the latter are growing so hated they are the kiss of death.

Endless multiculturalism and diversity are suicidal policies, as anyone familiar with the evidence here should be capable of seeing.

It’s precisely because Social Democracy and “Socialism” are associated with open borders and Regressive Left insanity that has led to the collapse of, say, the UK Labour Party.

The secret to reviving the modern Left is not ditching left heterodox economics, however: it is ditching Cultural Leftism and open borders, and returning to immigration restriction and some kind of sane social and cultural policies, and recognition that people in the Western world require some kind of national identity and policies to preserve that identity.

Only then will people be able to focus on economic issues again, and a left heterodox economic program can be used to win over electoral majorities.

But you have to solve the crisis of national identity first. That crisis of identity won’t go away and is illustrated perfectly by a recent Tweet by a Republican congressman called Steve King. 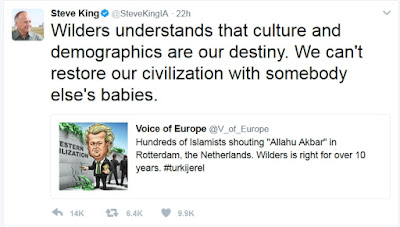 It represents a new-found public expression of what is actually not well understood by the public: because of low fertility rates in the West that have fallen below the replacement level of 2.1, modern Neoliberal governments see mass Third World immigration as a way of maintaining population levels and (they think) a way of maintaining taxation.

But in, say, Europe that means mass *demographic replacement* of native Europeans by the year 2100 and the cultural collapse of Western civilisation in Europe.

Quite simply, you would have to be stark, raving mad to think such a policy will not provoke a furious, unprecedented backlash from the general population once enough people realise what mass Third World immigration actually entails. What we see now in the rise of the populist right is only the beginning of that backlash.
Posted by Lord Keynes at 8:54 AM

Labels: Zack Beauchamp on Why the Modern Left is Collapsing