Is Crime in the West Out of Control?

This is not related to economics, but social commentary.

We often hear from right-wing “tough-on-crime” types that the West is in some kind of moral crisis today. Many right-wing religious types blame the collapse of religion and traditional Christianity in the West for the alleged claim that crime has gotten out of control.

So what do the statistics say on probably the worst crime possible: homicide.

The following graph (which should be opened in a separate window) shows homicide rates in five Western European countries from 1300 to 2010, namely England, Netherlands, Belgium, Scandinavia, Germany, Switzerland and Italy. 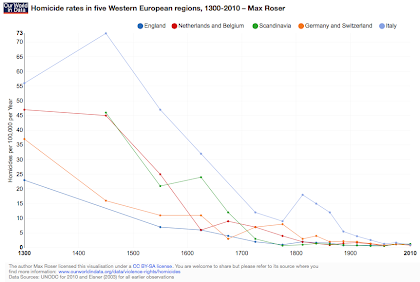 The data is compiled by Max Roser and can be seen here.

There is something utterly ridiculous about the right-wing narrative: in fact, there has been a long-run trend over many centuries in which homicide rates have plummeted.

Even when religion came under attack from the 18th century Enlightenment and belief in religion at large collapsed from the 19th century and in the 20th century, homicide rates continued to fall.

Our ancestors in the late Middle Ages and Early Modern Period were far more religious than we are, and by modern standards their societies were run along very conservative Christian lines, not only, say, with the death penalty for many crimes but also with some horrible and gruesome punishments for other (sometimes minor!) crimes, and even torture.

Yet they were far more violent than we are. The idea that the collapse of Christianity has led to some profound moral crisis and historical rise in murder is a lot of nonsense. With the rise of non-belief and secularism, the homicide rate continued to fall.

While it is true that in many nations there was a very mild rise in homicide rates from the late 1960s and 1970s, from a historical perspective this spike is so small as to be astonishingly trivial.
Posted by LK at 3:39 AM