David Starkey on the UK’s Recovery from the Great Depression

The statements in the video below by David Starkey on the UK’s recovery from the Great Depression are of some interest.

Before I get into criticisms, however, I may as well say that I do actually enjoy listening to David Starkey, and I find his brand of conservatism very interesting, even if I don’t agree with his economic analysis.

All in all, he has a rather odd take on Britain’s response to the depression. Starkey says that “Britain recovered faster than any other major economy.” It was even – allegedly – a “miracle”! This “miracle” was achieved, so it seems, by budget cuts, welfare cuts and austerity, but at the same time by imposing tariffs and some housing construction.

Now it is certainly true that Britain’s real GDP had recovered to its 1929 level by 1934. Britain did get some export-led growth in the 1930s after leaving the gold standard and devaluing its currency. They are the two main reasons why Britain had some degree of growth and recovery in the 1930s.

It is also true that the UK, generally speaking, pursued a contractionary fiscal policy and austerity in the 1930s and shunned the kind of large-scale Keynesian stimulus that Keynes recommended (for the specialist literature, see Broadberry 1984; Middleton 1981; and Middleton 1984). But austerity was not a cause of the recovery.

The most important metric we can appeal to in order to gauge just how successfully Britain in the 1930s recovered is unemployment. 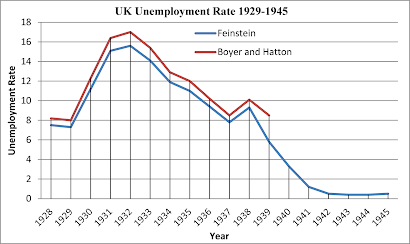 As we can see, British unemployment, although there was a falling trend, still remained very high through the 1930s down to 1938, the year before the war. In 1938, unemployment still stood at 10.1% (by Boyer and Hatton’s calculations) or at 9.3% (by Feinstein’s calculations). In other words, even in 1938 there was terrible mass unemployment in Britain.

Is it true that “Britain recovered faster than any other major economy”? Not at all. In fact, of the major economies both Japan and Germany had much better recoveries than Britain did – and certainly in terms of unemployment – because both nations turned to large-scale Keynesian fiscal stimulus (the evidence can be seen here and here, and one might add New Zealand to this list).

The lesson is not that what Britain did was some highly effective cure for depression. That idea is utterly ludicrous.

The conclusion is clearly: whatever Britain did was grossly inadequate and did not cure mass unemployment, the major consequence of the depression.

Of course, there is another severe problem with the idea that austerity leads to quick and effective economic recovery: the austerity of the Weimar Republic. Even on economic grounds, it was a catastrophe. And on its political consequences, well, I think we all know
what happened.