I summarise below Lecture II of Hayek’s Prices and Production (2nd edn.; 1935), the classic work where Hayek developed his version of the Austrian business cycle theory (ABCT). I use the second, revised edition of 1935 (the first edition was published in 1931).

Hayek commits himself to a static Walrasian general equilibrium model early in his Lecture II:

“…it is my conviction that if we want to explain economic phenomena at all, we have no means available but to build on the foundations given by the concept of a tendency towards an equilibrium. For it is this concept alone which permits us to explain fundamental phenomena like the determination of prices or incomes, an understanding of which is essential to any explanation of fluctuation of production. If we are to proceed systematically, therefore, we must start with a situation which is already sufficiently explained by the general body of economic theory. And the only situation which satisfies this criterion is the situation in which all available resources are employed. The existence of unused resources must be one of the main objects of our explanation.

(4) To start from the assumption of equilibrium has a further advantage. For in this way we are compelled to pay more attention to causes of changes in the industrial output whose importance might otherwise be underestimated. I refer to changes in the methods of using the existing resources. Changes in the direction given to the existing productive forces are not only the main cause of fluctuations of the output of individual industries; the output of industry as a whole may also be increased or decreased to an enormous extent by changes in the use made of existing resources. Here we have the third of the contemporary explanations of fluctuations which I referred to at the beginning of the lecture. What I have here in mind are not changes in the methods of production made possible by the progress of technical knowledge, but the increase of output made possible by a transition to more capitalistic methods of production, or, what is the same thing, by organising production so that, at any given, moment, the available resources are employed for the satisfaction of the needs of a future more distant than before. It is to this effect of a transition to more or less ‘roundabout’ methods of production that I wish particularly to direct your attention. For, in my opinion, it is only by an analysis of this phenomenon that in the end we can show how a situation can be created in which it is temporarily impossible to employ all available resources.” (Hayek 1935: 34–36).

Hayek is also concerned with the structure of production: that is, changes which involve a longer as opposed to a shorter period of production and a hence a longer period of time before final consumer goods output is produced (Hayek 1935: 38).

Hayek has the following famous diagram illustrating the structure of production, as below. 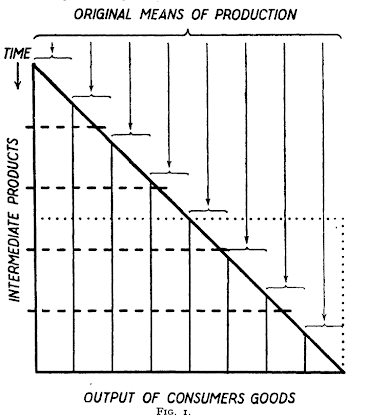 Hayek explains this diagram as follows:

As time increases between the use of the original means of production and the actual production of final consumer goods output, production becomes “more capitalistic” (Hayek 1935: 42).

The crucial problem for Hayek is: how does an economy transition from lower to much higher “capitalistic” methods of production? (Hayek 1935: 49).

“… a transition to more (or less) capitalistic methods of production will take place if the total demand for producers’ goods (expressed in money) increases (or decreases) relatively to the demand for consumers’ goods. This may come about in one of two ways: either as a result of changes in the volume of voluntary saving (or its opposite), or as a result of a change in the quantity of money which alters the funds at the disposal of the entrepreneurs for the purchase of producers’ goods.” (Hayek 1935: 50).

What underlies this reasoning are the following assumptions:

(1) A Wicksellian loanable funds theory, where money interest rates are determined by time preference and are a reliable and effective indicator of inter-temporal consumption plans;

(2) the assumption that investment is a straightforward function of money interest rates, and

(3) a situation of general equilibrium in which no unused resources are available.