David Andolfatto has a post here suggesting (but maybe not completely committing to) the idea that deflation in Japan isn’t such a bad thing:

And what is the evidence?

He notes that Japanese real per capita GDP since 2009 has risen at what seems like an unusually high rate: about a 3% annual growth rate. Certainly this is higher than the rates in the US or UK.

So what’s going on here?

First, Japanese real GDP has, except for 2010, not been spectacular:

The statistic of real per capita GDP is calculated by dividing real GDP for a given year by the population in that year.

Well, according to news reports, Japan’s population has been affected by a long-run decline in population since 2004 and has one of the lowest fertility rates in the world (currently at 1.39).

You need only look at this graph to see the trend.

And below we have another graph of Japanese population from 1994 to 2013 (with data from the World Bank). 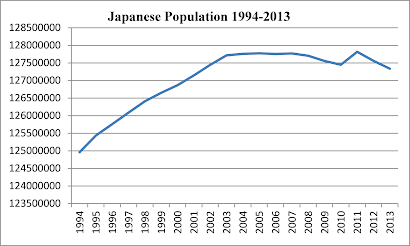 So Japanese real GDP has continued to rise since 2004, but population peaked then started to fall. It would seem that Japan’s unusual real per capita GDP growth since 2009 is more a function of its population stagnation and decline, then above average real GDP growth.

So what does this say about the merits of deflation? Not much.

Japan had both fiscal stimulus and monetary intervention in 2008–2009 and later years. That was what got it out of the great recession.

Another point is that Japanese deflation (at least according to World Bank figures) ended in 2012, as we can see in the graph below. 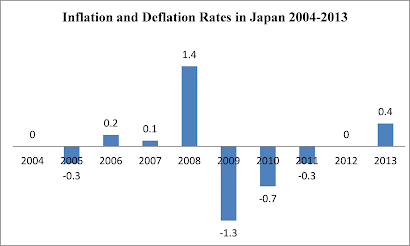