The Weimar Budget Deficits from 1919 to 1921 and Hyperinflation 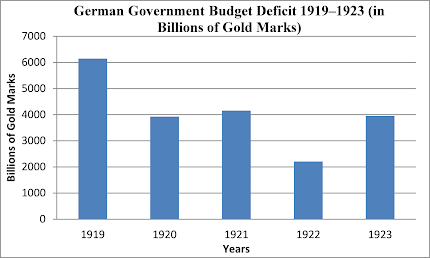 As we can see, the deficit of 1919 was large (larger than that of 1923, the worst year of the hyperinflation), but from 1920 to 1922 – apart from a small rise in 1921 – there was a clear falling trend. This was caused by the recovery of the German economy and by the tax reform of Matthias Erzberger passed in 1919. The falling deficit was actually a cause of increased confidence in the German economy at the time.

If the large deficits were the primary cause of the hyperinflation, then one must wonder why hyperinflation did not occur earlier in 1919 or 1920.

For the historical reality is that, although from the end of the First World War until early 1920, there was a serious depreciation of the mark, a degree of stability and confidence returned in 1920:

“This [sc. crisis of confidence] came to a halt in the spring of 1920 as conflict between domestic political factions diminished, increasing imports improved living conditions, industrial production began to grow and, in March 1920, the Erzberger tax reforms were enacted. ‘[I]t seemed that a certain faith in the mark was again established among the German population.’ Confidence and optimistic expectations about the future value of the mark remained dominant until the London Ultimatum of May 1921. Prices remained broadly stable, despite the continued growth of the nominal quantity of money… .” (Holtfrerich 1986: 190).

Given the falling deficit, the tax reform, the prospects for budget balancing, and the hope that the final reparations burden would be more realistic than the initial proposed figure, the evidence would suggest that there really were grounds for confidence in the mark from 1920 to May 1921 (Webb 1989: 54; see also Burdekin and Langdana 1995: 93).

The return of a relative stability in the dollar–paper mark exchange rate in 1920 and early 1921 can be seen in the graph below (with data from Feldman 1993: 5, Table 1). 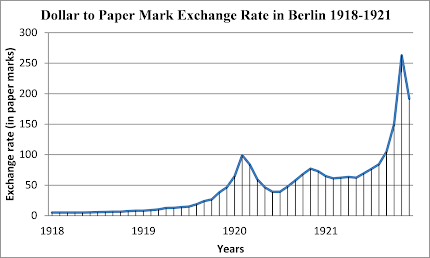 As we can see, by early 1921 the mark’s value had stabilised in terms of dollars. Then after the May 1921 London Ultimatum the catastrophic depreciation began, which was a fundamental driver of the hyperinflation.

It was only after May 1921 and the currency depreciation that run-away inflation occurred as well, as we can see in the German wholesale price index graph below (with data from Burdekin and Langdana 1995: 108, Table A5.1). 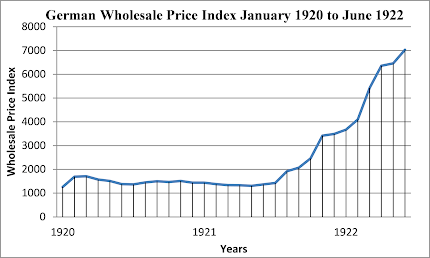 A further really catastrophic shift in domestic expectations about, and confidence in, the mark appears to have happened after June 1922 when the mark lost its role not only as a store of value but also as a unit of account (Holtfrerich 1986: 70), but this is perfectly consistent with the view that it was the accelerating currency depreciation beginning in late 1921 that was the fundamental driver of the hyperinflation.

Webb, Steven B. 1989. Hyperinflation and Stabilization in Weimar Germany. Oxford University Press, New York.
Posted by LK at 5:57 AM