Following on from the last post, I post below a diagram of the left heterodox economics schools. This is a provisional diagram only, since the subject is a difficult one. Once again it needs to be opened in a separate window to be properly viewed. 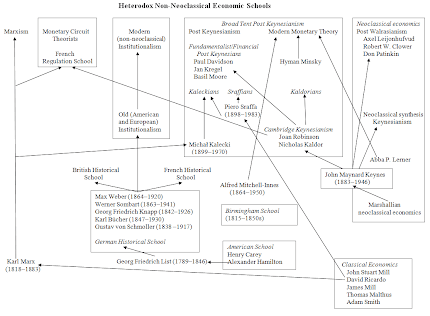 I use the term “broad tent Post Keynesianism” for Post Keynesianism in the broadest sense, incorporating the different sub-schools, as described by Marc Lavoie in his talk below (from 50.37) and this fascinating paper here, with some minor differences: for example, I do not regard MMT as an Institutionalist tradition but within the broad Post Keynesian tradition (I discuss the history of MMT here).

On the extreme right I have included a column with some neoclassical schools for clarity (such as Neoclassical synthesis Keynesianism and Post Walrasianism).

I have also chosen to include Abba P. Lerner in that column (which some might find controversial).

The schools or approaches I have left out include:

(5) Herbert Simon and the behaviouralist school;

(8) left libertarian economics such as syndicalism.

It appears to me that some of these groups are not really coherent economic schools at all (e.g., behavioural economics), and some are still heavily influenced by neoclassical economics.

Others I have left out simply because there is not enough room for them on the diagram!

One interesting but neglected historical school was the 19th century Birmingham School, a proto-Keynesian group of economists.

Lavoie, Marc. 2014. “To which of the Five Streams of Post-Keynesianism does John King belong?”
http://www.vu.edu.au/sites/default/files/cses/pdfs/lavoie-paper.pdf