Gold Bubble About to Collapse?

The short answer is that one cannot predict the price of gold in 1 year, 2 years, 5 years or 10 years with an objective probability score, but the recent crash does not seem to augur well.

Presumably, a lot of smug smiles have been wiped off the faces of hordes of goldbugs, along with the value of their asset portfolios! Austrians and libertarians are starting to look like the fools we always suspected they were, with their hyperinflation hysteria and exaggerated predictions about the price of gold.

Notice the rout in the graph below. 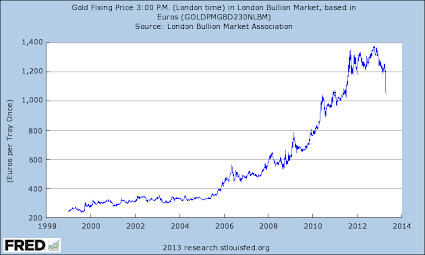 And it is an incredibly steep rout at that! To put things in historical perspective, we can see the long-term price graph from 1968 to 2013 below. 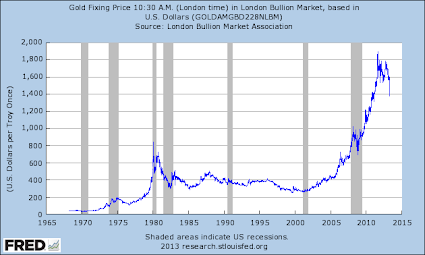 The soaring price after 2008 so obviously looks like a bubble, and the crash, which (admittedly) might or might not continue, may signal that the gold bubble has finally popped, just as the last bubble did in 1980. After the last crash, gold was in a bear market for nearly 20 years.

If something like that happens now, many people will be left facing massive losses on their gold.