Was the 20th Century Really the Most Violent?

That is the question posed and answered by Steven Pinker (Pinker 2011: 193–200), and his answer is likely to startle many people.

First, let us consider the man depicted in this painting below. 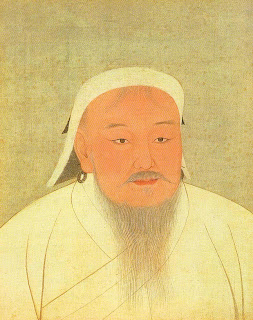 You might recognise him already. This is Genghis Khan (c. 1162–1227), and the evidence would suggest that he rivalled the worst 20th century dictators in the number of people killed during his wars of conquest.

Of course, in terms of absolute numbers, no one doubts that the 20th century was the most violent in human history.

Yet immediately one must point out that the 20th century also had a greater population than any previous century. The question “how violent is this war compared to that war?” requires per capita death rates, not absolute numbers.

The table below ranks the most violent episodes in Medieval and Modern human history, and all dates are AD.

That is to say, if Tamerlane had lived in the 20th century, and his conquests had occurred with the same per capita death rate as they did in his own time, how many people would have died?

What do you notice?

Notes
(1) Some of these atrocities were mostly caused by man-made (or preventable) famine, e.g., the death toll for Mao Zedong and British India.

What is most remarkable is that of the top 10, only the Second World War makes it onto that list, and only at number (9) in terms of per capita death rates.

All the other 10 most violent events of human history did not even occur in the 20th century.

The most murderous events of human history were the An Lushan Revolt in the 8th century AD China, and the Mongol Conquests of the 13th century AD.

The death toll from the Mongol Conquests was very high, and the 20th century equivalent would have been a conflict in which 278 million people died. By contrast, the Second World War killed some 55 million people.

That would make Genghis Khan one of the worst monsters of history, and the eruption of essentially stateless nomads from the Eurasian steppe one of most violent events of human history.

Nor were the Mongols the first such invaders. Sedentary agricultural peoples down through the centuries – in Europe, the Near East and China – have been terrorised by steppe nomads many times in human history: we need only think of the (often stateless) Scythians, Sarmatians, Goths, Huns, Bulgars, Avars, Magyars, Tartars, Cumans, Khazars, Mughuals and Manchus. The wars of such people are remarkably consistent with Pinker’s thesis about higher levels of violence in stateless and tribal societies as compared with state-based societies.

Pinker, Steven. 2011. The Better Angels of our Nature: Why Violence has Declined. Viking, New York, NY.