Marx’s pamphlet The Civil War in France (1871) praised the Commune as a communist government, but recent research suggests that the Commune was more a radical middle class government than a communist one, so that Marx’s support for it was paradoxical (Sperber 2014: 382). The opposition to Marx’s support for the Commune caused him to withdraw from active political activities after 1871. It also caused a split in the International as the English trade union leaders Benjamin Lucraft and George Odger resigned and associated themselves with the Liberal party (Wheen 2001: 330).

Marx suffered one of his regular health breakdowns in 1873, which stopped him from working for months and which forced him to withdraw from activism (Sperber 2014: 503).

By the mid-1870s moderate socialist parties and leaders in Europe had risen to challenge the views of revolutionary communism and of Marx in significant ways. In Germany, in 1875 the Socialist Workers’ Party of Germany was founded, which became the modern Social Democratic Party of Germany, and it adopted a moderate program that Marx opposed.

Marx’s Critique of the Gotha Program was based on a letter he wrote in 1875 but was only published in 1891; it was directed against the political and economic program that the new German party adopted, which had been influenced by the ideas of Lassalle (Sperber 2014: 526). Marx’s private critique was ignored and the Socialist Workers’ Party of Germany adopted the Gotha program, and prefigured the so-called “revisionism” of later socialists who abandoned Marx’s violent revolutionary ideology (Sperber 2014: 529). 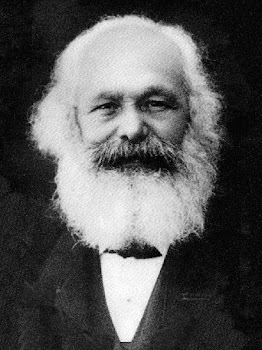 Engels also organised the first English translation of volume 1 of Capital that was published in 1887, translated by Samuel Moore and Edward Aveling (who had become the partner of Marx’s daughter Eleanor “Tussy” Marx in 1884).

Engels attempted to build up the idea of Marx the scientific socialist by presenting him as the “Darwin” of political economy, as in his eulogy for Marx at the funeral:

“Just as Darwin discovered the law of development or organic nature, so Marx discovered the law of development of human history: the simple fact, hitherto concealed by an overgrowth of ideology, that mankind must first of all eat, drink, have shelter and clothing, before it can pursue politics, science, art, religion, etc.; that therefore the production of the immediate material means, and consequently the degree of economic development attained by a given people or during a given epoch, form the foundation upon which the state institutions, the legal conceptions, art, and even the ideas on religion, of the people concerned have been evolved, and in the light of which they must, therefore, be explained, instead of vice versa, as had hitherto been the case.

But that is not all. Marx also discovered the special law of motion governing the present-day capitalist mode of production, and the bourgeois society that this mode of production has created. The discovery of surplus value suddenly threw light on the problem, in trying to solve which all previous investigations, of both bourgeois economists and socialist critics, had been groping in the dark.

Two such discoveries would be enough for one lifetime. Happy the man to whom it is granted to make even one such discovery. But in every single field which Marx investigated -- and he investigated very many fields, none of them superficially -- in every field, even in that of mathematics, he made independent discoveries.

Such was the man of science. But this was not even half the man. Science was for Marx a historically dynamic, revolutionary force.”
Frederick Engels’ Speech at the Grave of Karl Marx, Highgate Cemetery, London. March 17, 1883.
https://www.marxists.org/archive/marx/works/1883/death/burial.htm

But Engels had already taken much the same view in the Anti-Dühring (1878) which depicted Marx as a scientist who had discovered a historical determinism to social and economic history (Sperber 2014: 550). Moreover, Engels’ presentation of Marxism in the Anti-Dühring (1878) and Socialism: Utopian and Scientific (1880) was profoundly influential in shaping the myth of Marx and a version of his economics to later communists, especially in the Soviet Union (Sperber 2014: 550; Hunt 2009: 300).

Some scholars have argued that Engels reworked Marx’s thought (Hunt 2009: 280) and even that there were actually significant differences between Engels’ version of communism and that of Marx, such as in Norman Levine’s The Tragic Deception: Marx contra Engels (1975) (Hunt 2009: 301). To some extent some of these arguments are made by Marxists who want to whitewash Marx and exonerate him from the horrors of communism, but there seems to be some truth to the view that it was Engels who popularised Marx’s work in the 1880s (Hunt 2009: 282). Yet, at the same time, Marx seems to have fully endorsed the Anti-Dühring (1878) so that it accurately represented his mature thought (Hunt 2009: 301–302).

By the 1920s onwards, a renewed interest in Marx’s older Hegelian texts encouraged an existentialist reading of Marx by Western intellectuals (Sperber 2014: 553), and a Structuralist, Poststructuralist and Postmodernist interpretation of them by the late 20th century.

An interesting fact is that when Engels examined Marx’s manuscripts after the latter’s death he found that those for volumes 2 and 3 of Capital were far from a completed state, so that he had to edit them for publication (Hunt 2009: 303–305). Hunt (2009: 306) argues that Engels’ editing of volume 3 involved very significant changes to Marx’s manuscripts, including the amalgamation of some sections, the adding the subdivisions, even insertion of material by Engels himself and changing of Marx’s ideas about the tendency of the rate of profit to fall. It was apparently Engels who linked this to the final collapse of capitalism, not Marx (Hunt 2009: 306; see also the excellent discussion of Heinrich 2013).

Vollgraf, Carl-Erich and Jürgen Jungnickel. 2002. “‘Marx in Marx’s Words’? On Engels’s Edition of the Main Manuscript of Book 3 of ‘Capital,’” International Journal of Political Economy 32.1: 35–78.