US Prices in the 1930s and Administered Prices

The US suffered from severe deflation in the contractionary phase of the Great Depression from 1929 to 1933, yet that deflation was highly uneven once the price data is disaggregated.

Gardiner Means (1975) examined that data and concluded that even in the 1930s administered prices/mark-up prices were already widespread and economically significant.

Means looked at five price indices for wholesale prices, and found that even here there was a huge disparity between administered prices and flexprices.

The following table shows Means’ data in graph form (and needs to be opened in a new window to be read properly). 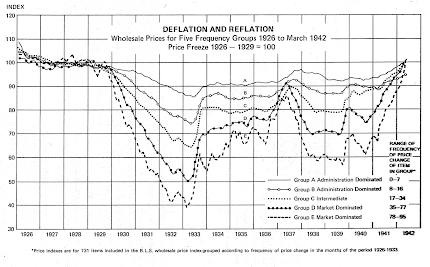 As we can see, Group A (mostly manufactured goods) and Group B are administered price goods; Group C is an intermediate type of good that also includes administered prices but where flexprice commodities form an important component of the factor costs, so that the price reflects costs to a greater degree than other administered prices (Means 1975: 7).

This graph also demonstrates the thinking behind many New Deal programs that attempted to raise prices: these programs were designed to reflate flexprices to fix the terrible disparity that had arisen between the incomes of businesses and farmers whose product prices had collapsed by 50–60%, as compared with the administered price markets. Although some of the methods by which the New Dealers did this were rather stupid and unnecessary, such as the Agricultural Adjustment Administration’s (AAA) payments to farmers to destroy crops and animals to raise prices, the general aim of reflating flexprices was not stupid, but defensible. The reflation had largely succeeded by 1937, when Roosevelt turned to austerity and induced a further recession from 1937–1938 in which another severe disparity between wholesale product price groups emerged again.

As Means noted, the inflation in flexprices during recoveries from recessions in any economy where administered prices are widespread is essentially a “natural part of the recovery process” (Means 1975: 10) and restores the price balance of an economy (Means 1975: 11).

BIBLIOGRAPHY
Means, Gardiner C. 1975. “Simultaneous Inflation and Unemployment: A Challenge to Theory and Policy,” in Gardiner C. Means et al., The Roots of Inflation: The International Crisis. Wilton House Publications, London. 1–31.
Posted by LK at 4:13 AM