I review Chapter 5 of Steve Keen’s Debunking Economics (the rev. and expanded 2011 edn.) below, which is a discussion of the Post Keynesian theory of the firm.

Neoclassical theory assumes that in the short run as output rises productivity falls: that is, increasing levels of output will result in higher prices, and the marginal cost curve of a firm slopes upwards (Keen 2011: 103).

That is, a typical neoclassical firm will face diminishing marginal productivity and rising marginal cost, so that the “profit maximising” firm will stop producing when marginal cost of production equals the marginal revenue from sales (Keen 2011: 107–108).

Therefore the level of output is determined by the point where marginal revenue equals marginal cost (Keen 2011: 108), and the average firm cost curve is U-shaped.

The trouble with this theory is that, for most firms, it is untrue and the empirical evidence blatantly contradicts it:

“Economic theory also doesn’t apply in the ‘real world’ because engineers purposely design factories to avoid the problems that economists believe force production costs to rise. Factories are built with significant excess capacity, and are also designed to work at high efficiency right from low to full capacity. Only products that can’t be produced in factories (such as oil) are likely to have costs of production that behave the way economists expect.

As Keen notes, Piero Sraffa’s article “The Laws of Returns under Competitive Conditions” (Economic Journal 36.144 [1926]: 535–550) argued long ago that this “law of diminishing marginal returns” does not, generally speaking, apply to modern industrial economies (Keen 2011: 108). Instead, the general tendency would be constant marginal costs and horizontal cost curves.

Secondly, firms do not make full use of their resources and operate with unused excess capacity. This can be seen in the graph below of total US capacity utilisation since 1967 as a percentage of resources used by corporations and factories in their production of goods in manufacturing, mining, and electric and gas utilities. 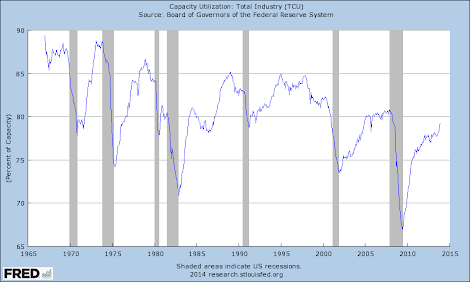 Even during the strong boom in the late 1960s US capacity utilisation was below 90%, and in the boom of the late 1980s only climbed to about 85%.

Spare capacity is the normal state of affairs, and indeed often essential for firm survival in a market economy, because the best way to deal with an uncertain future with sudden, unexpected changes in demand is to vary capacity utilisation (with use of inventories) (Keen 2011: 125).

One can even note how with the abandonment of Keynesian full employment policies of the 1945 to mid-1970s era (the so-called golden age of capitalism) there has been a persistent falling trend in average capacity utilization. Modern market economies since the late 1970s have had a plague of unused or underused resources from unemployed labour to underutilised factories.

Keen notes the paradox pointed out by Janos Kornai: that the old communist economies had persistent problems of scarce resources that limited production, whereas capitalist economies normally have relative abundance and a significant volume of unused resources, so that production is limited mainly by demand for output (Keen 2011: 115).

Finally, Keen points to the empirical evidence of Eiteman and Guthrie (1952) and Blinder (1998).

Eiteman and Guthrie (1952) was a survey in which 334 companies were shown a number of different cost curves, and asked to specify which one best represented the company’s cost curve.

A stunning 95% of managers chose cost curves with constant or falling costs, which is contrary to marginalist theory (Keen 2011: 125).

Blinder (1998) conducted much the same type of survey, which involved 200 US firms in a sample that should be representative of the US economy at large.