There are three estimates of US unemployment in the 1890s, as follows:

We can see them below in the following graph. 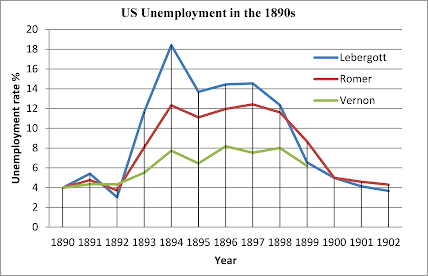 These are quite seriously divergent estimates and the question arises: who is right?

There is an important question here about whether movements in the labour force – especially involving women – were pro-cyclical or countercyclical in the 19th century.

If labour force participation rates were countercyclical in the sense of rising during recessions, then this added to unemployment rates, as women, young adults, and perhaps even children went out and looked for employment when their husband/fathers/breadwinners lost employment. If this assumption is correct, then Lebergott’s estimates may be better ones for unemployment rates.

“Together with the results of the cross-section regression on city-wide labor force participation, this casts serious doubt on the plausibility of procyclical labor force behavior before 1914.

These empirical results make sense from the historian’s perspective. In a period before social security and unemployment insurance, the notion of an added worker effect among secondary workers is surely more persuasive than a discouraged worker effect. Similarly, the absence of pronounced procyclicality in labor productivity fits the historical image of a labor market characterized by spot markets, with rapid turnover and limited adherence to internal labor markets.” (James and Thomas 2007: 39).

“Before 1914, the labor market worked such that business cycle downturns spread unemployment over a larger share of the labor force; in the postwar period, recessions deepened the length of time out of work for the smaller proportion who lost their jobs.

These results indicate that modern modes of labor market behavior were not typical of the pre-1914 US; by extension, it must be that the twentieth century has seen significant changes in the nature of the labor market. But they also carry implications for the debate over stabilization since 1948. In particular, they cast considerable doubt on Romer’s claims that the measured decline in unemployment volatility was a statistical artifact created by the procedures used to construct the historical series. The assumption of a unitary elasticity of employment to output does not seem out of place for the period before 1914; if anything, the appearance of an added worker effect before 1914 suggests that Lebergott’s method of interpolating labor forces data between census benchmarks may have understated the degree of unemployment.” (James and Thomas 2007: 40–41).

The upshot of all this is that Romer’s assumption of procyclical movements in labour force participation rates before 1914 appears unrealistic, and her figures are therefore unreliable.

It seems to me that Vernon’s (1994) even lower estimates are also rendered unreliable by this, since Vernon assumes procyclical movements in labour force participation in the 19th century too, and simply adjusts Romer’s own unemployment data (Vernon 1994: 702, 709).

Despite the charge that Lebergott’s estimates of 1890s unemployment are based on limited data (namely, the Frickey employment index series covering industrial employment in Ohio and a number of northeastern states [Vernon 1994: 709]), nevertheless his figures may be more reliable than Romer’s or Vernon’s, and the 1890s – at least by this criterion – were a period of severe US unemployment and economic crisis comparable to the Great Depression. 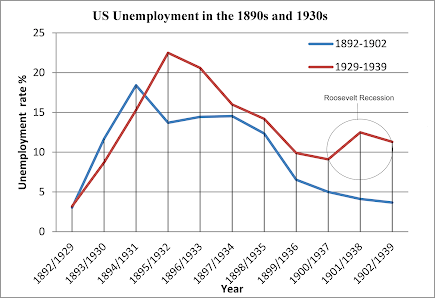 First, we should ignore the Roosevelt recession of 1937–1938, because that was a policy-induced recession caused by austerity. Although unemployment in the 1930s did rise to a higher level, nevertheless the 1890s shock was very bad indeed, and employment growth appears to have stagnated from 1895 to 1897 (under a double dip recession). But, at this comparable point in the 1930s, as measured from the onset of the depression, US unemployment was falling sharply under the New Deal.

We can conclude that 19th-century capitalism under the gold standard was quite capable of delivering unemployment shocks comparable to the Great Depression, even if not quite as high, if we accept Lebergott’s estimates as reasonable.