The graph below illustrates the cost curves of a typical real world firm as understood in the Post Keynesian theory of the firm. Such a firm is also a mark-up pricing firm. 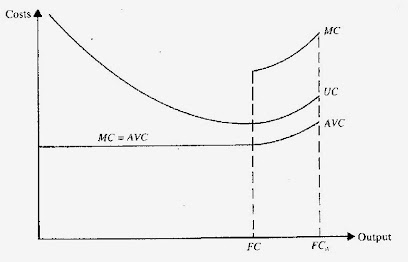 It is assumed that average variable cost is a reasonable proxy for marginal cost (an assumption widely held, as in, for example, the Areeda-Turner predation rule [Areeda and Turner 1975]).

Between full capacity (FC) and theoretical full capacity (FCth), marginal costs and average variable costs will increase, because of overtime payments, cost of increased maintenance of machines, and possible increased costs of replacement for machines whose operation life will be decreased (Lavoie 1992: 120, 125–126).

However, firms generally do not produce beyond the point of full capacity, so that the rising cost curves to the right of the point FC are mostly irrelevant to real would firms (Lavoie 1992: 121).

Empirical studies have confirmed that the U-shaped cost curves of neoclassical analysis are irrelevant for many real world firms, because firms prefer to avoid production beyond the point FC. Therefore realistic total average long-run cost curves for such firms are L-shaped and average variable (or direct or prime) cost curves are constant (Lavoie 1992: 122, citing Johnston 1960; Walters 1963; Lee 1986). Marginal cost is also found to be generally constant up to full capacity (Lavoie 1992: 122).

The effective use of excess capacity can also deter other firms from entering a market, and can therefore function as a barrier to entry (Lavoie 1992: 124).

One of the neoclassical responses to heterodox mark-up pricing is to argue that it is compatible with standard marginalist theory. A standard view is that, in imperfectly competitive markets, firms will set a price that is a markup over marginal cost (Fabiani et al. 2006: 16).

Yet mark-up businesses normally use total average unit costs to calculate prices, not marginal cost or average variable costs. In fact, marginal cost is a concept some business people have difficulty even understanding (Blinder et al. 1998: 216–218, 102; Fabiani et al. 2006: 16; Ólafsson et al. 2011: 12, n. 8), and most do not use it in calculating prices (Hall and Hitch 1939: 18; Govindarajan and Anthony 1986: 31; Shim and Sudit 1995: 37). These findings simply refute the idea that firms in general are using marginal cost (or only average variable costs) in calculating prices.

And if firms really are so concerned with the concept of marginal cost, then why do they show such a lack of interest in it or even confusion in understanding it? This is simply inconsistent with the second purported explanation.


Glossary
I repeat some definitions of key concepts below.

Average cost
This is total production costs per unit of output produced by a business. This equals (1) total fixed (overhead) costs plus (2) total variable costs divided by the number of units of output produced. Given that many businesses can use economies of scale and increase their output over time, average costs may fall too, because average fixed (overhead) costs fall, since they are divided by more units of output.

Variable costs
Costs that vary with the rate of output, usually labour and raw materials costs. These are sometimes called operating costs, prime costs, on costs, or direct costs.

Marginal cost
The cost accruing from an additional unit of output.

Lee, F. S. 1986. “A Post-Keynesian View of Average Direct Costs: A Critical Evaluation of the Theory and the Empirical Evidence,” Journal of Post Keynesian Economics 8.3: 400–424.