Government Debt Levels over 90% and US GDP Growth

I think many people are now aware of the Reinhardt and Rogoff fiasco involving the spreadsheet error.

The idea that once government debt exceeds 90% of GDP, real output growth slows is at the heart of the whole Reinhardt and Rogoff business.

Although I cannot claim to have read Reinhardt and Rogoff’s work in detail, some thoughts strike me.

First, it is rather obvious that a lot of the data from nations where the debt-to-GDP ratio was higher than 90% come from years during and after World War II.

You can see this below in the graph of US gross federal debt as a percent of GDP. 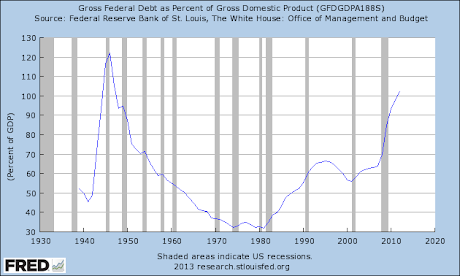 Obviously, the war years cannot count in any attempt to determine whether in peacetime, normal circumstances debt-to-GDP ratios over 90% slow growth.

But it is probably equally important to exclude certain years after 1945 as well. Why?

The reason is that the immediate post war years were highly irregular, because of the dismantling of wartime command economies and the conversion back to normal consumer-goods producing economies.

We can see this in the real GDP data for the US in these years:

It is curious that the annual GDP data show contractions in 1945, 1946, and 1947. But, as I noted above, this contraction was mostly the result of the dismantling of the US command economy and conversion of the wartime economy back into a peacetime economy producing consumer goods.

From its wartime peak in 1944 to 1947, GDP contracted by 12.7%. That was indeed a technical depression, but a depression sui generis mainly as wartime production ended.

Did Reinhardt and Rogoff correct and control their data in all countries concerned for this factor?

I really do not know, but I assume it is an important line of criticism.