US Inflation Rates (1946–1987), Keynesianism and Stagflation

It is sometimes claimed that the Keynesian golden age of capitalism (1946 to 1973) had an accelerating inflation rate. The story goes: all Keynesianism did was cause a never-ending, upward trend in inflation rates.

The myth was peddled by (of all people!) the British Labour politician James Callaghan (UK Prime Minister from 1976 to 1979) when in 1976 he declared that Keynesianism “only worked on each occasion ... by injecting a bigger dose of inflation into the economy, followed by a higher level of unemployment as the next step,” before he introduced at least a rhetorical commitment to a pre-Thatcherite form of monetarism in the UK.

But it is nonsense, certainly in the case of the US, as we can see in the graph below. 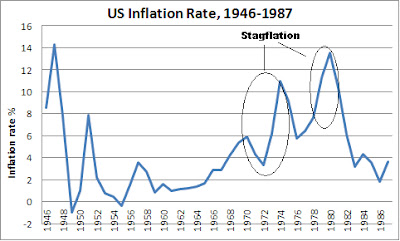 There were two outliers: the post-WWII inflation and the Korean War inflation. But, apart from these, the inflationary spike that did break out after 1968 was unusual and a deviation from the basic price stability of the golden age. That price stability was most notable for the late 1950s and most of the 1960s. In fact, actual deflation briefly occurred twice in the post-WWII era.

As Nicholas Kaldor long ago noted, during the golden age “for a long time the rate of inflation (as measured by consumer prices) remained moderate, and until the closing years of the 1960s it showed no clear tendency to acceleration” (Kaldor 1976: 214).

The reason for the inflationary crisis of the 1970s was four-fold:

(1) From 1968–1971 there were the beginnings of inflationary pressures, in both wages and prices in many industrialised nations. The fundamental cause was that around 1968–1969 in Japan, France, Belgium and the Netherlands and from 1969–1970 in Germany, Italy, Switzerland and the UK wage rises had occurred, which Kaldor attributes to strong action by unions (Kaldor 1976: 224). There is a perpetual struggle between capitalists and labour over distribution of income, and it just happened that around 1968 to 1970 labour won out in many countries causing a bout of cost-push inflation (via wage increases). But this would not have become a serious problem had it not been for factors (2), (3), and (4).

(2) the dismantling of commodity buffer stock policies that had previously ensured price stability. The prelude to stagflation was marked by a significant explosion in commodity prices that occurred in the second half of 1972. Part of the problem was the failure of the harvest in the old Soviet Union in 1972–1973 and the unexpectedly large purchases on world markets by the Soviet state. This could have been averted had the United States not dismantled its commodity buffer stock policies in the 1960s.

(3) The end of Bretton Woods (the post-WWII international monetary system) was momentous: inflationary expectations and instability on financial and commodity markets resulted, as well as a rise in commodity speculation as a hedge against inflation. This contributed to the cost-push inflation that was being felt in many countries after 1971.

The unfortunate concatenation of these historically unprecedented shocks – that is, factors (1), (2), (3), and (4) – in toto was the cause of 1970s stagflation.

Kaldor stresses the importance of factor (2). During most of the golden age of capitalism (1945–1973), primary commodity buffer stocks had created stable prices. But this policy was changed in the 1960s when the US modified its buffer stock policies:

“… the duration and stability of the post-war economic boom owed a great deal to the policies of the United States and other governments in absorbing and carrying stocks of grain and other basic commodities both for price stabilisation and for strategic purposes. Many people are also convinced that if the United States had shown greater readiness to carry stocks of grain (instead of trying by all means throughout the 1960s to eliminate its huge surpluses by giving away wheat under PL 480 provisions and by reducing output through acreage restriction) the sharp rise of food prices following upon the large grain purchases by the U.S.S.R. [in 1972–1973], which unhinged the stability of the world price level far more than anything else, could have been avoided.” (Kaldor 1976: 228).

That was a major factor causing stagflation, along with wage–price spirals. The first oil shock was a final factor that exacerbated everything.