Jonathan M. Finegold Catalán attempts to prove that the recession of 1937–1938 was not caused by contractionary fiscal and monetary policy:

I. The Data
First, some basic facts about the recession and data:

In analysing the effects of fiscal policy in these years, one should not confuse the calendar year with the fiscal year: these are two different things.

(3) Data on the Federal budget can be found here: 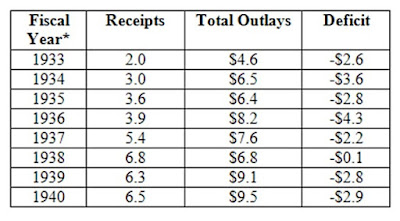 (4) Data on total government spending (including local, state and federal) can be found here:

Total US Government Spending in billions of dollars.

Now these figures do not show us whether increases in total government spending were expansionary or contractionary, as one needs to look at whether the spending increases occurred by deficit spending or merely out of current revenues.

“The idea that Herbert Hoover was a laissez-faire president and that Roosevelt's New Deal paved the road to recovery have been refuted elsewhere.”

I have already refuted the Austrian attempts to paint Herbert Hoover as some radical interventionist president or big-spending Keynesian here:

Hoover adopted some very limited policy interventions and very mild increases in federal government spending from 1929–1932, but these were almost completely destroyed by state and local austerity.

“Interestingly, during 1935 — a year considered one of recovery — total government outlays measured $6.4 billion, less than during both 1936 and 1937. In fact, looking back to the years from 1933 to 1935, government spending peaked at $6.5 billion in 1934. It suffices to say that explaining Roosevelt's recession by pointing at a decrease in government spending is severely dishonest.”

Catalán commits the red herring fallacy, and is laughably ignorant of basic Keynesian theory: to gauge the effects of fiscal policy in any particular year and to see whether it was expansionary or contractionary, one must look at

(1) the size of the deficit and whether there was increased spending done via deficits, not just the size of spending per se;
(2) whether tax policy changed and if revenues rose owing to tax increases, and
(3) not just federal spending by itself, but total government spending at the local, state and federal level, to see if the net effect of deficit spending was expansionary.

In fact, total government spending in fiscal years 1935 and 1936 was highly expansionary:

The expansionary effect of fiscal policy in these years must be attributed to the large federal deficits. In fiscal year 1934 there had been a large deficit, but its expansionary effect was reduced to some extent by state and local austerity. In the fiscal years 1935 and 1936 federal deficits overcame that state and local austerity and imparted significant stimulus at a time when the financial system had been stabilised and monetary policy aided recovery.

This shows up in the figures above for total government spending for 1937 and 1938, where total spending barely moved, and was at any rate offset by contractionary state and local fiscal policy, as in 1934 (Cary Brown 1956: 867–868).

In fact, the role of state and local governments during the depression was deeply contractionary most of the time:

“The nation’s fiscal policy throughout the Great Depression included the fiscal actions of state and local governments as well as of the federal government. During the early years of the depression, state governments increased spending for unemployment relief, primarily through subventions to local governments, which faced sharply declining property tax revenues, soaring rates of default, and even popular revolts, including a tax strike in Chicago. They did so by increasing sales taxes and by reducing spending on public works, especially highways, and schools. State constitutions, however, limited deficit finance, and new state and municipal bonds were extremely difficult to market. As the Depression worsened in 1931 and 1932, state and local governments found it impossible to conduct business as usual and still balance their budgets. State and local governments began adopting drastic economies, scaling back total expenditures in 1931 and sharply contracting them in 1933 and 1934. State governments welcomed federal funding of unemployment relief and public works, although they resisted the requirement of the Federal Emergency Relief Administration and the PWA for state matching funds. When economic recovery advanced, particularly in 1936 and 1938, state and local governments resumed spending on public works and education and thus once again increased their total outlays. Sharp increases in tax rates, however, erased any stimulative effect of state and local spending. State and local governments had pushed up tax rates every year between 1929 and 1933, and maintained those high levels until 1936, when they undertook even further increases. State governments increased the scope and rates of their sales taxes until, in 1940, they raised most of their funds through such levies.” (Elliot Brownlee 2000: 1044).

What was also deeply contractionary was the fact that state and local governments were running surpluses:

“Over the same seven years [sc. 1932–1938], state and local government revenues increased—principally from higher taxes—at a faster rate than expenditure.” (Bagwell and Mingay 1987: 282).


(1) did so by raising taxes (which did not stimulate the economy), and

(2) they even ran surpluses, which drained even more spending power from the economy, an astonishingly anti-Keynesian thing to do at a time when the economy needed countercyclical fiscal policy.

State and local government contractionary fiscal policy in 1937 and 1938 was thus caused by (1) raising taxes and (2) running surpluses.

(1) in June 1936, the Revenue Act passed Congress and caused a significant increase in income tax rates, as well as the tax on undistributed profits. The main effect of the tax on undistributed profits was to adversely affect the cost of investment for small and medium-sized firms. There is a reasonable case to be made that this tax increased business uncertainty about profitability of investment.

(3) The Fed increased Reserve requirements on July 14, 1937 and this went into effect the next month; the second and third increases in reserve requirements were announced on January 30, 1937, and came into effect on March 1 and May 1 respectively. From December 1936, the treasury began to sterilise gold inflows into the United States by using proceeds of bond sales to pay for gold brought to the treasury. From December 1936 to February 1938 the monetary base grew by only 4% while gold stock grew by 15%.

The tax increases reduced the federal deficit very significantly indeed by fiscal year 1938, by causing revenues to rise. The net effect of all this when combined with federal spending cuts was highly contractionary: this was the cause of the 1937–1938 recession.

(3) Catalán ignores the fact that the Federal deficit was almost abolished in fiscal year 1938. Catalán states:

Catalán also confuses the fiscal year with the calendar year. Some data:

The recovery began in July 1938, which is in fiscal year 1939. Most of the actual recession coincided with fiscal year 1938, precisely the year when the deficit had been nearly abolished.

It was only in about April 1938 that Roosevelt turned once again to expansionary fiscal policy and ended the austerity programs. It was no surprise that some months later the recession ended, and economy began to grow again, and entered another expansionary phase of real GNP growth, as the federal deficit soared to $2.8 billion in fiscal year 1939 (July 1, 1938–June 30, 1939).