Herbert Hoover’s Budget Deficits: A Drop in the Ocean

The meme that Herbert Hoover was some type of big spending Keynesian seems to be an especial favourite of Austrians, and some examples of this idea can be seen here:

Typically, once such claims are examined they collapse like a house of cards.

It is of course true that Hoover often gets unfairly blamed as an advocate of the extreme liquidationist solution to the Great Depression, a solution which was actually recommended by Andrew Mellon (US Treasury Secretary from 1921–1931). In truth, Hoover rejected extreme liquidationism, and attempted to fight the onset of Great Depression with a number of limited interventions, including increased government spending.

But the idea that Herbert Hoover’s small budget deficits could ever have stopped the Great Depression remains absurd, and Herbert Hoover ran a federal budget surplus in fiscal year 1930, the first year of the devastating contraction that occurred from 1929–1933. A significant cause of his budget deficits in fiscal years 1931, 1932, and 1933 was the collapse in tax revenues, and his stimulative discretionary spending increases in the budget in fiscal years 1931 and 1932 were a stone in the ocean compared to the massive collapse in US GDP.

Far from disproving Keynesian economics, Hoover’s policies reinforce the basics of Keynesian deficit spending, and also show how financial crises and bank collapses need to be prevented, if one wants to arrest an economic spiral into depression.

In particular, Austrians and other libertarians refuse to properly understand basic Keynesian concepts, such as:

(1) Potential GDP,
(2) the Keynesian multiplier and
(3) the appropriate level of discretionary spending increases that actually bring about Keynesian stimulus and positive GDP growth.

To begin with, we need to understand some basic facts about the US budget, the fiscal year and Depression history:

(4) The first contractionary phase of the Great Depression in America ran from August 1929 to March 1933. Thus, when Roosevelt came into office, a recovery was just starting to happen. The aftermath of the severe contraction from 1929 to 1933 was what neoclassicals would call a suboptimal equilibrium with high involuntary unemployment.

(5) The size of US government spending in 1929 was very small. As Herbert Stein notes:

Thus Hoover’s increase in federal spending of 30.25% in fiscal year 1932 is deeply misleading, because total federal spending as a percentage of GDP was very small in these years, and just 2.5% of GDP in 1929.

(6) We can the list the state of the US budget and federal spending, including Hoover’s budget deficits, below: 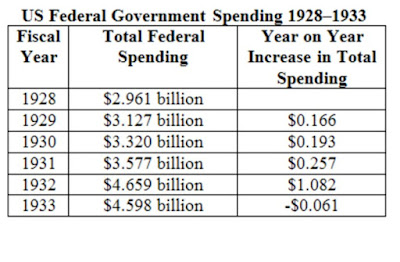 As noted above, Roosevelt was not inaugurated until March 1933, so Hoover was responsible for the budget in fiscal year 1933 as well.

Hoover actually ran a budget surplus in the fiscal year 1930, not a deficit. Hoover’s first deficit was in fiscal year 1931, when the US economy had already begun contracting severely. He also cut spending in fiscal year 1933, and introduced the Revenue Act of 1932 (June 6) which increased taxes across the board and applied to fiscal year 1932 and subsequent years. These were highly contractionary measures, and these two policies are the very antithesis of Keynesianism!

An antidote to the conservative nonsense about Hoover can be found in Bruce Bartlett, “The Real Lesson of the New Deal,” Forbes.com, 2.13.09.

In order to understand whether deficit spending is truly stimulative, we need to understand the following terms: the output gap, potential GDP, actual GDP, and the Keynesian multiplier.

Bartlett shows that once the output gap is calculated and we have a rough estimate of the multiplier in the 1930s (possibly as high as 4) it can be shown that Hoover’s budget deficits and discretionary spending were woefully inadequate. Far from disproving that Keynesian stimulus doesn’t work, Hoover’s spending demonstrates that too little spending in the face of an economic catastrophe is a recipe for disaster.

For the moment, let’s ignore the impact of state and local budgets (though, as we will see below, that is in fact an important factor). In 1931, US GDP collapsed by $14.7 billion dollars, in a debt deflationary spiral with bank failures and a collapse in employment and investment. If we assume a multiplier of 4 (which is very high), then Hoover’s spending increase of $257 million dollars might have generated at most $1.028 billion of GDP in fiscal year 1931. But GDP fell by $14.7 billion dollars! Only an complete idiot or ignoramus would seriously argue that Hoover’s increase in spending in fiscal year 1931 could have prevented the depression, by effective stimulus to offset such a catastrophic fall in GDP. 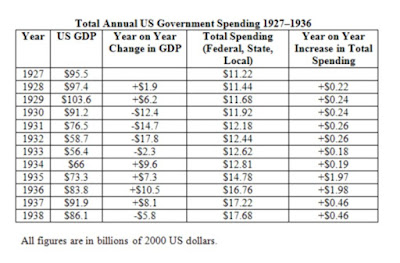 You can see the collapse in GDP for every year from 1930 to 1933 above, and the increases in government spending. The only real difference is the total US government spending did increase in fiscal 1930 and 1933, but by small amounts, not even remotely large enough (even with a multiplier of 4) to arrest the collapse in GDP. What is also apparent in the figures above is that state and local austerity counteracted Hoover’s spending increases in 1931 and 1932. In particular, what looks like a large increase in federal spending of $1.082 billion dollars in fiscal year 1932 was reduced to just $0.26 billion by state and local austerity. What is also noticeable is that total government spending was significantly increased in fiscal years 1935 and 1936 under Roosevelt, and these were years of strong GDP growth.

The myth that Hoover attempted a Keynesian countercyclical policy designed to reverse the collapse in 1929–1933 is one of the most stupid things spouted by Austrians and libertarians.

Murphy on “Did Hoover Really Slash Spending?”: A Critique

Over at Mises.org, we have a perfect example of type of absurdity I point to above:

Murphy is of course perfectly correct that Hoover increased spending in 1930, 1931, 1932, but in no sense does that refute Keynesian economics, as he claims at the end of his essay.

Let’s examine some of worst statements in his essay below:

“But the point is that the Fed had implemented record ‘easy’ policies from November 1929 through September 1931, some 22 months after the onset of the Great Depression.”

Murphy makes a great deal of the fact that the Fed lowered the discount rate from 1929 to 1931, which is true. He seems blissfully unaware that Keynesian economics tells us that monetary policy in times of severe economic contraction and depression will be ineffective. The old Keynesian dismissal of monetary policy in these times was summed up in the expression “pushing on a string”, which means that cheap money and low interest rates just don’t create significant aggregate demand when the economy is shocked. It is not remotely surprising that monetary policy did nothing to counteract the depression.

“Today’s Keynesians love to point to history to ‘prove’ the efficacy of their remedies. In particular, they adore Hoover’s budget cuts of 1932, and the Fed’s rate hikes of October 1931, as proof positive that ignorant conservatism caused the Great Depression. But prior to these turnarounds in policy, the federal government and central bank operated in a Keynesian fashion”

This is perfectly absurd. The aim of a Keynesian policy in a downturn is stimulate the economy so that GDP contraction is reversed and positive growth returns. If we assume a multiplier of 3 in 1930, to counteract the Great Depression, the US government would have had to increase spending by $4.13 billion in fiscal year 1930. Instead, the total government spending (local, state and federal) increase in 1930 was a miserable $240 million.

Again, if we assume a multiplier of 3 in 1931, to counteract the contraction that year, the US government would have had to increase spending by $4.9 billion in fiscal year 1931. Instead, the total government spending increase in 1931 was a feeble $260 million.

“If the Keynesians were right, the economy should have been in a tepid recovery by mid-1931, and yet it was in fact still freefalling.”

Murphy is perfect ignoramus. He hasn’t a clue about basic Keynesian concepts and how to apply them. The idea that the tiny spending increases in 1930 and 1931 could have stopped the depression is pure madness.

And even Hoover’s larger increase in 1932 was counteracted by state and local austerity, as we have seen above.