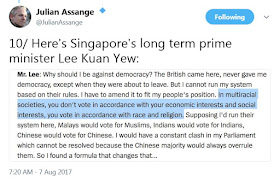 The traditional Leftist concern for the Third World (which I support) can then be based around reform of the international economic institutions, the abolition of Neoliberalism, and development aid using Post Keynesian economics, so that people in the Third World can attain strong economic and social development in their own nations, instead of wanting to come in the millions into ours.
Lord Keynes at 5:04 AM